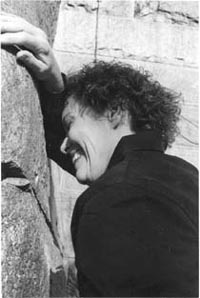 Judith Rock is a dancer, choreographer, writer, actor, and former auxiliary NYPD police officer. Her one-woman show, Response Time, based upon her experiences as a police officer, was performed at the 78th Street Theatre Lab in New York City in 1998.

Some of Rock’s work is featured in Image issue 18 and issue 68. Read an excerpt by Rock here.

“Originally drawn to theology, because it deals with meaning, I quickly realized that I wanted to work with the question of meaning as an artist rather than as a clergywoman. I gave up my ordination as a Presbyterian minister, and was, for eighteen years, a professional modern dancer and choreographer. I co-founded and co-directed the Berkeley-based Body and Soul Dance Company, and was also a solo performer and modern dance teacher.”

“I hold a B.A. in religion, from Duke University, as well as a Master of Divinity degree from San Francisco Theological Seminary (San Anselmo, CA), a master’s degree in dance from Mills College (Oakland), and a Ph.D. in theology and art from the Graduate Theological Union (Berkeley).”

“For the doctoral dissertation, I researched seventeenth and eighteenth century French Jesuit ballet, later turning the dissertation into a book, Terpsichore at Louis le Grand: Baroque Dance on the Jesuit Stage in Paris (Institute of Jesuit Sources, 1996). The book was nominated for the De La Torre Bueno Prize in 1998.”

“In 1988, Harper and Row published Performer as Priest and Prophet, co-authored with the late Dr. Norman Mealy, a musician and musicologist, about the contemporary relationship of performing arts and religion. My articles include “Women and the Jesuit Theatre,” Le Supplement (Paris), September 1988; “Voices of My Selves,” CrossCurrents Fall 1993; “Making Meaning Now,” Arts, Seven/Two 1995; “The Grace is in the Transitions,” Image, No. 18, Winter 1997- 1998; and “The Rhetoric of the Body,” Conversations, No. 14, Fall 1998.”

“Stage work in addition to the years as dancer and choreographer includes re-staging and directing the first North American production of a ballet from the French Jesuit baroque repertoire. L’Esperance (1709), was produced in San Francisco in May 1985.”

“In 1995, I wrote and performed a one-woman show, Street Stories with Glimpses of the Sky, for the Sihler Lecture at Luther College in Decorah, Iowa. An expanded version of the show, renamed Response Time, was produced in Portsmouth, New Hampshire, by the New Hampshire Theatre Project in 1997, and at the 78th Street Theatre Lab in New York City in 1998.”

“The show grew out of my working as a police officer during my “dancer transition.” In 1991, I became an auxiliary police officer for the NYPD. When I went to Minnesota to teach, I joined the Northfield Police Department, first as a reserve officer, and then as a licensed and sworn part-time officer, from 1992 to 1995. After graduating from the Institute of Criminal Justice Police Academy in St. Petersburg, Florida, in 1995, and deciding not to pursue a full-time law enforcement career, I returned to New York to write and act, and re-joined the NYPD auxiliary unit, “retiring” as a sergeant in 1998.”

“The personal concern underlying all these somewhat disparate activities and projects has remained the making of meaning. What does it mean to be a human being? How do we make sense of the good and evil that illuminate and shadow each life? How do we help each other make it through the night?”

“Transitions are like rivers-they don’t really end. They bend and slow down and speed up-become ponds or oceans. My transition seemed to end on the stage, but it has since taken me to my desk and my computer-and to sugar cane fields and maps and tiny Florida towns-as part of the hands-on research for my first novel, now nearly finished. The book reaches deeper into the territory Response Time opened.”

“Last February-thanks to the Image essay on transition-I performed Response Time at the Pecos Benedictine Monastery, near Santa Fe, as part of leading a weekend-long workshop on adult transition. I hope to continue to present the workshop-and show-in the future.”

“At home in New York, I teach a course each year, called “The Body of Knowledge,” as a lecturer in art and communication at Union Theological Seminary (NYC), and work with an ongoing group of artists and area clergy to promote the integration of art into seminary curricula.”

“I am also a part-time co-director of two projects sponsored by the Association for Religion and Intellectual Life: the Coolidge Colloquium, which draws together an international group of scholars at Columbia each July; and Time Out, a grant program enabling women scholars and artists to work on projects while in residence in various kinds of monastic houses.”