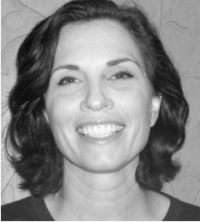 Kim Alexander, who profiled the Austin-based collage artist Lance Letscher in Image issue 44, is also a delightful artist in her own right. Her quirky, surrealistic paintings mix crisp, playful design elements and trompe l’oeil images with deeply compassionate portraits of pain and loss. At once intellectual and humane, witty and emotive, her work bears the influence of her extensive reading in philosophy and aesthetics as well as her experience teaching immigrant students at an urban high school in Dallas. Her essay on Letscher combines a thorough engagement of art-world ideas with a working painter’s eye: she illuminates his use of color and texture, placing it within the context of his larger project of giving expression to mystery, and along the way she wrestles with the legacy of modernism and the limitations of postmodern skepticism. Alexander herself is an artist who understands the need for community—and who works to create it. Along with Mike Capps she organizes the Trinity Arts Conference  each June at the University of Dallas, an annual arts festival dedicated to fostering community and craft excellence among believing artists and writers—in particular to young artists and those who feel isolated or ignored within the Christian world. For us at Image, Kim exemplifies a life lived in response to a calling, both to artistic excellence and to serving others.

Some of Alexander’s work is featured in Image issue 81. Read Joe Milazzo’s essay on Alexander here.

When I was four my mother died, and I grew up adrift. My gentle, irresponsible father lived on cons and seduced a string of four angry stepmothers to rear my siblings and me while he traveled. Poor and always on the move, our chaotic life drove me to solitude and drawing. By the time my father died, just a few months after my sixteenth birthday, I didn’t believe in love or God or even cause and effect. Because of my orphan status, the government paid my way through Michigan State University. I didn’t feel challenged by the studio art program and decided to teach myself to paint while I studied philosophy, literature, and art history. That’s pretty much how I developed my style, without formal studio training.

That first year at Michigan State University, God confronted me with an irrefutable assertion of His existence. I was shocked to find someone in charge of this brutal world, and I tried to gauge what I perceived as an icy heart that customarily withholds relief from the afflicted. Even I, with my detachment, would have more mercy, I thought. I raged at God for his apparent indifference, but I reluctantly pledged obedience. I had adapted to vicious truths all of my life, and I figured God was just one more cheat that I had to accommodate. That was before I discovered the greatest commandment. I hated the greatest commandment. I knew I could never love God short of a miracle, so I began to ask for that miracle. I would have denied Him if I could.

After time and labor, I did grow to love God but I knew so little about Him. Like an ignorant child, I imitated the Christians around me who, unfortunately, had no appetite for complex art. They taught me the scriptures, but I felt cautious about my peculiarity as an artist and I stopped making serious art for about eight years. In retrospect, my reticence to paint seems absurd, but that’s how poorly I understood God. Now I try to help other believers to shore up their creative lives with resources like Image. For the past twelve years, in fact, my dear friend Mike Capps and I have co-directed an interdisciplinary, ecumenical conference for Christians in the arts, the Trinity Arts Conference (Thanks very much to the guidance and support of Greg Wolfe and Image). We meet yearly to draw artists to one another and to resources that will encourage them to live fully as artists in Christ. I’m grateful that I can give to others that I once went without.

I’ve been painting through the periodic table. I think of it as a poem that describes the physical world with a rhythmic structure and efficient grace. Each element lends itself to imaginative language. Hydrogen, for example, is called the ambiguous element because it can combine with other elements by either gaining or losing an electron. My painting Hydrogen, a portrait of my friend Xi, celebrates ambiguity, with amphibians, symmetry, and binaries. Each painting is a little school for me. My study of boron led to a portrait of “Borax Bill,” a muleskinner who drove twenty-mule teams, pulling wagons of borax out of Death Valley. As I work along this border between art and science, my paintings insinuate that art is a way of knowing, and that science, as an expression of humanity, is inextricable from the less rational aspects of our nature and histories.

This leads to a second theme in my work, the interconnectedness of all things. My other series, Young Immigrants, observes that we all belong to one another. Just as each element has its place in the periodic table, each of my students is essential to the whole universe. Again, I use a scientific gesture to make this point. My Young Immigrant paintings mimic botanical illustrations, which were once considered a scientific record. They remind me that I am a naturalist in my classroom, where I teach English to immigrants. I use paint to record the wealth of nature in my daily environment. One Seed, for instance, observes the fertility of a small act of kindness. It expresses my perpetual astonishment that my routine efforts as a teacher generate all sorts of surprises in the lives of my students. They take my mundane gestures and build dreams beyond my anticipations.