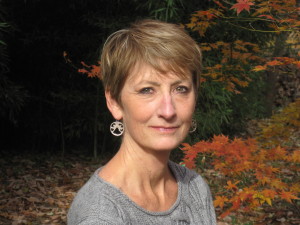 Through her poems, Margaret Mackinnon lets us enter the inner lives of writers and artists from other ages—figures like Mary Shelly, Grant Wood, Walt Whitman, and Nathaniel Hawthorne. Her rich imagination creates vivid, concrete scenes in which to set her “characters,” as well as persuasive inner landscapes that make distant and stately figures recognizably and empathetically human. More than a parlor trick, her ability to dwell so fully in other times, places, and minds becomes a way of enlarging the world, and of bringing us along for the journey as she pursues the connection between, in her words, “what is clear” and “what is mysterious.” From lives we know mainly through their artistic output, she draws the ordinary worries and joys of marriage, children, financial cares, old age, and loss. Rather than making these luminary figures less, she makes our own lives deeper and richer through the possibility of connection. Her poetic language is quietly musical, with a carefully executed use of form and line and a generous delight in the five senses. She paints a vibrant natural world of sensations and phenomena that constantly attracts and draws us on, and that keeps the spiritual, intellectual, and narrative dimensions of her work continually grounded in the physical world.

Some of Mackinnon’s’ work is featured in Image issue 71. Read a poem by Mackinnon here.

Margaret Mackinnon grew up in the South, influenced by a lush landscape and a family that emphasized a deep connection between language and meaning. Her mother wrote poetry as a young woman (and generously encouraged all her earliest literary efforts). Her father was a Presbyterian minister, so every Sunday, she watched him try to give shape to beliefs and questions through the words of sermons, prayers, and creeds.

In college, at Vassar and the University of North Carolina, Mackinnon studied art history and religion, thinking about how image and pattern intersect with what we see as significant. And then came five years in Japan, where she taught English and studied textile design in a small circle of Japanese women artists. She learned something there about the discipline of a craft, and how that kind of focus can take one into a deeper attention to the everyday world. Back in the United States, she entered the graduate program in creative writing at the University of Florida.

Margaret Mackinnon’s work has appeared in Poetry, New England Review, Georgia Review, Quarterly West, Southern Humanities Review, Valparaiso Poetry Review, and other publications. Her awards include the Richard Eberhart Poetry Prize from Florida State University, a Tennessee Williams Scholarship from the Sewanee Writers’ Conference, and a residency at the Vermont Studio Center. She teaches at a private girls’ high school and lives in Falls Church, Virginia.

In “Final Soliloquy of the Interior Paramour,” Wallace Stevens describes a moment when he senses “the obscurity of an order,” which, for him, becomes “light” and is “enough.” If I have a goal for my poetry, it is to explore that point of connection between what is clear and observable and what is infinitely obscure and mysterious. The poems I have worked on in recent years often feel like little research projects: they take time to construct and are often based in hours of reading. But I am also trying to write poems that themselves move in different times. My poem on Whitman, for example, came out of thinking about his “invented child” and how his experience linked to my own feelings about my daughter.

Recently, I have been working on a series of poems about my parents, both now deceased. I am also drawn to poems reflecting on writers and artists whose work has touched me in different ways: Mary Shelly, Grant Wood, and Whitman, among others. Marianne Moore, whose rigor and complexity I love, is a subject for a future poem, I hope. What interests me in looking at the lives of other people—whether well-known artists or the members of my own family—is the way the specific details of a life, of the world, can take us right up to the edge of understanding—and then leave us with a recognition of the boundlessness of all we can love and appreciate but never fully understand.