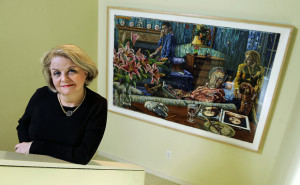 Andrew D. Brosig/The Daily Sentinel Nacogdoches artist and retired Stephen F. Austin professor Mary McCleary poses Tuesday, Feb. 7, with one of her pieces titled “Allegory of the Senses” in her home. McCleary, who described her artistic style as collages of found objects, was recently named 2011 Texas Artist of the Year by the Houston Art League.

Wayle L. Roosa wrote about Mary McCleary’s work in Image issue 23 in his cover article entitled “A Fullness of Vision: Mary McCleary’s Collages.” Professor Roosa begins his article saying, “There is a fullness of vision in Mary McCleary’s art. It is a particular and peculiar kind of fullness, one that is engorged with the fecundity of earth and the senses, and yet simultaneously inhabited by a silent and spiritual presence hovering—both immanent and transcendent—amidst all that is sensuous and of the earth. Indeed, the viewer’s experience of her work is one of being struck and mesmerized by so many ingredients that the sumptuous fabric of these collages dazzles and then seduces.” Mary McCleary taught a workshop in collage at our Glen Workshop in Santa Fe, 2000.

Some of McCleary’s work is featured in Image issue 23 and issue 80. Read about her work here. 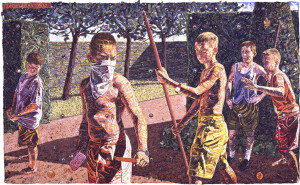 Mary McCleary is Professor of Art at Stephen F. Austin State University, where she has taught since 1975. She received her B.F.A., cum laude in printmaking/drawing at Texas Christian University and her M.F.A. in graphics from the University of Oklahoma. Since 1970 she has participated in over 230 group and one-person exhibits in 24 states, Mexico, and Russia, in venues such as the National Museum of Women in the Arts in Washington, D.C., the Boston Museum of Art, the Dallas Museum of Art, the Contemporary Art Museum in Houston, the San Antonio Museum of Art, and the Nelson-Atkins Museum in Kansas City. She is also a recipient of a Mid-America Arts Alliance/National Endowment of the Arts Fellowship. Mary McCleary is represented by Adair Margo Gallery, El Paso, TX and Kathleen James Gallery, Houston. 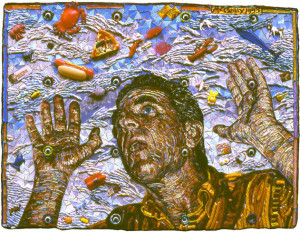 “In the coming months I will be completing work for the fifteen-year retrospective of my collages being organizaed by the Galveston Art Center. After the exhibit opens in November, 2000 it will travel to museums and art centers in Dallas, Beaumont, San Antonio and Nacogdoches, Texas. In July, 2000 collages will be included in a survey show, “Spirituality and Religion in Contemporary Art” at the Gallery at the American Bible Society in New York. I look forward to participating in the Trinity Arts Conference at the University of Dallas in June and Image‘s Glen Workshop in Santa Fe in August.”

“The collages featured in Image issue 23 were based directly on Bible stories. My work in recent years has become more allegorical, drawing from sources of literature, history and popular culture. I plan to continue making collages but in the coming years hope to return to some printmaking and even explore limited edition artist’s books and book illustration.”