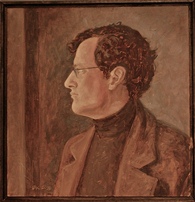 Matthew Milliner may be a specialist in Byzantine art, but in the scope of his writing he is a true Renaissance man. Just lately, this prolific polymath has written or spoken on art and justice, the advent of post-secular academia, sex and mysticism, how neo-pagans saved the Christian understanding of Advent, and in Image issue 75, the contemporary art world’s return to form and image. (He describes George Tooker’s first and last image of Christ delightfully: “Christ—modestly wrapped in the shroud—stretches with delight as if from a long and satisfying rest, a sort of Easter day calisthenics to adjust to newly risen life.”) In all of Milliner’s writing and speaking, there is a driving theological current—one that never bypasses the physical reality of the art itself in favor of bolted-on theological readings, but one that cracks opens a door to “the infinite within the finitude of form.” And Milliner has the chops to open a door to the infinite for a wide variety of readers. His regular audiences vary from his undergraduate students at Wheaton, to the readership of First Things, to the millions reading The Huffington Post online. This is fitting for an art historian whose work never clings to the “islands of fine art” when broader visual culture and its attendant theological echoes span so much further. Every artist is a theologian, says Milliner—even those who might consider themselves neither: “Artists, philosophers, art historians, musicologists, and theologians cannot give up on this intersection [between art and religion], even if the best thing they can do to assist theological aesthetics is to pursue their own areas of study more thoroughly.” He’s not just a polymath, he’s a prophet.

Some of Milliner’s work is featured in Image issue 75. Read here.

Byzantine art historians have the joyful task of updating the history of art to reflect how itactually happened (as oppose to how self aggrandizing sixteenth-century Tuscans like Giorgio Vasari thought it did). My research involves discovering the origins and theological meanings of images that sparked the Renaissance and now saturate the globe. Now at Wheaton College, I live an art historian’s dream, surrounded by practicing artists: My daughter was baptized under a numinous painting of Christ the Good Shepherd by Joel Sheesley, and I receive the Eucharist at a table constructed by the provocative sculptor David Hooker. I see the medieval tradition revivified in the challenging photography of Gregory Schreck, the graphic arts marshaled to healing effect in the design of Jeremy Botts and documentary work of Joonhee Park, and the art world’s self-focus shattered by the pedagogical prowess of Leah Samuelson. It’s a good life.