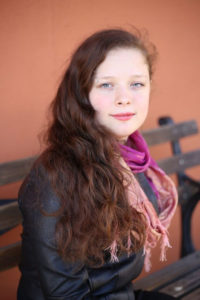 When we first read Molly McCully Brown’s essay, “Bent Body, Lamb” (which would become our most-read essay of 2016), we were immediately drawn in by the poignancy and starkness of the opening scene: a mother and young teen daughter lie in the dark heat of a Virginia summer night, together enduring the physical torment of the daughter’s painful leg convulsions. From the raw intimacy of that moment, the essay expands outward into a consideration of the meaning of the body and bodily suffering, and then to a comic, tender, and profound narration of Brown’s college interest in religion and eventual reception into the Catholic Church. What we admire most about her style is the cocktail of personal revelation and thematic ambition: the finely wrought essay dances between memoir and thought-piece. Also a gifted poet, last year Brown published her prizewinning first collection, The Virginia State Colony for Epileptics and Feebleminded, whose beautiful, excruciating poems are likewise a consideration of the theological meaning of the human body in all its imperfection and suffering.

Molly McCully Brown is the author of The Virginia State Colony for Epileptics and Feebleminded (Persea Books, 2017), which won the 2016 Lexi Rudnitsky First Book Prize. Her poems and essays have appeared or are forthcoming in Gulf Coast, Pleiades, Ninth Letter, TriQuarterly Online, Kenyon Review, The Rumpus, and elsewhere. Raised in rural Virginia, she holds degrees from Bard College at Simon’s Rock and Stanford University. Currently, she is a John and Renée Grisham Fellow at the University of Mississippi.

My first collection of poems, The Virginia State Colony for Epileptics and Feebleminded, was just published last month. The book is centered around a real, government-run residential hospital for people with serious mental and physical disabilities that was the epicenter of the American eugenics movement in the first half of the twentieth century. All the poems are in the voices of imagined patients and staff on the Colony grounds in the 1930s.

As I try to move out of the world of that collection I’m at work on two different projects, both of which actually owe something substantial to the essay that appeared in Image. The first is a collection of personal essays that approach, from a variety of angles, my evolving understanding of the intersection between the physical body and that intangible other thing I’ve come to call the soul. The essays arise out of my experiences with disability, medicine, poetry, religion, and the American South, but my hope is that they come together in the service of an intellectual and spiritual constellation much bigger than my own life. The second project is another collection of poems which engages with the death of my identical twin sister when we were infants. The poems are partly autobiographical and partly an exploration of doubles, twins, and twinless-ness in mythology, literature, and history. More broadly, the manuscript is a meditation on grief, identity, sisterhood, and what it means to survive marked by loss.