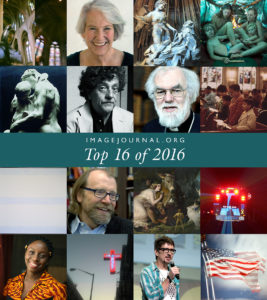 As I was looking over Image’s website analytics at the end of 2016, I confess that I was overcome with affection and gratitude for you, our online readers. Your attention has painted a picture, and it is a significantly different picture than many other outlets show.

The New Yorker, for example, introduced their most-reads thus: “Americans, as you may have heard, like to read about Donald Trump and his family. Readers of The New Yorker are no exception to that rule, but they also like some other things, too….We like sex, we like death, and we like music.”

Well, Image readers also like sex (see #5) and we also confront death (see #12). And it’s certainly not that we tune out the realities of politics (see #16)—but, given this list of the most-read articles on imagejournal.org in 2016, I feel justified in suggesting that Image readers seek to cultivate a different state of mind. To slow down, to look deeper, to press against the frantic inertia of the world. To inhabit spaces of creative tension—by reading ecumenically, by reading honest accounts of tragedy and grief right alongside comical stories that poke fun at religious culture (see #11 and #12).

Thank you for reading Image in 2016. The time and attention you give through your reading life truly does create something beautiful.

A note about our paywall: if you are not a journal subscriber, you will be able to read one article from the archive per month (per device). If you are a subscriber, you can set up your archive log-in for free here. Four of these articles were published here on our daily blog, Good Letters, which means they are outside the paywall; those articles are denoted with a diamond. To subscribe to our online archive and get unlimited access to more than 1,000 poems, essays, interviews, and short stories for $3.99/month, click here.

♦ 16. Some Questions on Politics and the Imagination, Gregory Wolfe

Gregory Wolfe interviews (interrogates?) himself—specifically, the “part of you that thinks you’re copping out by refusing to tackle political issues, preferring to swan about in your palace of art”—and uncovers some insights about politics, culture, and the imagination in the process.

In this two-part interview (read part 1 here, part 2 here), director Scott Derrickson discusses his most recent movie, Marvel’s Doctor Strange; mystery as “the presence of more meaning than you can comprehend;” the problem with immortality; and the relationship between trauma and faith. (Scott will lead the film seminar at the Glen Workshop this summer!)

Chimamanda Ngozi Adichie has been called an African writer, a Nigerian writer, a feminist writer, and a postcolonial writer—but rarely is she called a Catholic writer. In our 2010 interview, she discusses her writing, whether or not it is Catholic, and the differences between Catholicism in America and Nigeria.

12. Unless a Kernel of Wheat Falls, Ryan Masters

Ryan Masters’s essay on the death of his newborn son is narrated with startling serenity, clarity, and literary beauty. It’s a story about love, and the way being parents together transforms love; though Masters and his wife were parents for only a few minutes, they were parents fully. It’s also a story about grief, and the way grief shapes communities: sometimes simply being present for someone else’s grief—more than advice, more than advocacy, more than wisdom or even practical service—is the truest expression of love.

11. Man Is But an Ass, Harrison Scott Key

Harrison Scott Key tells the hilarious tale of his time acting in a Baptist theater ministry. (In addition to being our #11 most-read writer in 2016, Harrison also won the Thurber Prize for American Humor, which is arguably more impressive.) (In 2017, Harrison will lead the memoir workshop at the Glen, where we think his sense of humor will fit right in!)

George Saunders on his Catholic upbringing, his spirituality now, and experiencing kindness through writing fictional characters.

In October, the Guggenheim Museum in New York City opened a major retrospective of the subtle, minimal artwork of Agnes Martin. Many readers revisited Joanna Weber’s 2009 essay on the relationship between Agnes Martin’s paintings and the three houses she built in New Mexico before her death in 2004.

8. Religious but Not Spiritual, Gregory Wolfe

Gregory Wolfe provides an alternative point of view. “The poet William Carlos Williams coined the phrase ‘No ideas but in things’ to express a poetic that preferred concreteness to abstraction. By the same token, I know of no spirituality outside the relationships that constitute the daily life of my community.”

The former Archbishop of Canterbury discusses the risks of poetry, Flannery O’Connor, the relationship between tragedy and faith, and more. “When people compare Christian belief to belief in the tooth fairy or Santa Claus, I want to ask, where are the Divine Comedies or Matthew Passions or Four Quartets inspired by the tooth fairy?”

Kurt Vonnegut has a reputation as a committed atheist, but his friend Dan Wakefield offers insight into the writer’s deep admiration for Christianity.

Elizabeth Duffy on the Church’s vision of sexuality and Eros. “My heart and soul demand consummation. I was made for it.”

3. The Wound of Beauty, Gregory Wolfe

“Beauty itself wounds us, pierces our hearts, opens us up.” Beauty has often played the role of Cinderella to her sisters, goodness and truth. In this essay, Gregory Wolfe explores why it’s necessary to a fully-formed Christian vision.

Advice from Annie Dillard to those embarking upon the writing life. “You need to know these things somewhere in the back of your mind, and you need to forget them and write whatever you’re going to write.”

When she heard that her essay was the most-read piece on imagejournal.org last year, Molly McCully Brown said: “I’m honored, and a little awed….In many ways, it still feels to me like the most personally risky thing I’ve written, territory I’m still working my way fumblingly through, but I’m so grateful to everyone who read and shared it this year.” Molly’s first book, The Virginia State Colony For Epileptics and Feebleminded, will be published in 2017.