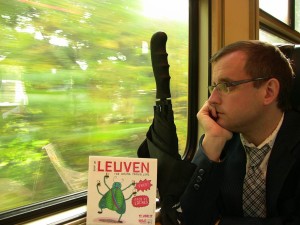 Morgan Meis is not dead yet. But that’s no reason not to go ahead and read him now. With his wide-ranging reading and viewing habits, deadpan wit, and capacious mind, in his blog posts and print-magazine essays, he makes an engaging and polished tour-guide to the churning world of literary, artistic, and religious phenomenon that the internet brings to our door. An old-fashioned generalist, he writes about painting, theology, novels, film, and anything else he wants. His essay in Image issue 80, about being catechized by an elderly Sri-Lankan nun as he prepared to enter the Catholic Church, is a bit unusual for him. It’s personal and immediate, and told almost entirely in scene—a dramatization, not an explanation, of a certain kind of life change—but the distinctive and elegant prose make it his. Meis is an ambitious writer, and a young one. We’re eager to see what mark he leaves on the literary landscape—and we hope we don’t have to wait too long to see it.

Some of Meis’s work is in Image issue 80 and issue 85. Browse through some of his work here.

Morgan Meis is the critic-at-large for The Smart Set. He has a PhD in Philosophy and is a founding member of Flux Factory, an arts collective in New York. He has written for n+1, The Believer, Harper’s Magazine, and The Virginia Quarterly Review. He won the Whiting Award in 2013. Morgan is also an editor at 3 Quarks Daily, and a winner of a Creative Capital | Warhol Foundation Arts Writers grant. A book of Morgan’s selected essays can be found here. He can be reached at morganmeis@gmail.com.

I write about visual art (but sometimes literature, or movies, or something else) on a bi-weekly basis for The Smart Set. That takes up a certain amount of my mental energy day-to-day. Then I spend a good deal of time trying to figure out how to sneakily pitch essays of some “spiritual significance” to mostly secular outfits like n+1, Slate, New York Times, etc. Usually I fail at this. So don’t mention it to anyone. It will be our secret.

I am working on a tremendous literary project that I think of as The Nietzsche Dialogues. The import of this project will only be recognized years after my death (perhaps centuries), so this is the first and probably only news you’ll ever hear of it. It is because of my high regard forImage that I’m letting readers in on this exciting pre-posthumous news. I already completed the first volume, which is a slim monograph on a painting by Peter Paul Rubens and its relation to Nietzsche’s Birth of Tragedy. I haven’t published it because I’m not yet dead. The second volume will be about Wagner’s Götterdämmerung in its relation to Franz Marc’s apocalyptic horse paintings and his letters to his wife just before dying at the Battle of Verdun. In the ninth or tenth volume of this project, readers will realize that I take Nietzsche very seriously because he is the only honest atheist. That’s to say, he recognizes that the death of God is a big deal, if true. Strangely, it is largely through reading and rereading Nietzsche that I’ve come to understand why I have to be a Christian. More on that over the next several decades and after I’m dead.