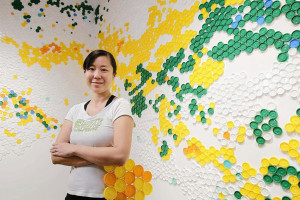 [Olga Lah and her piece “Propagate” is one of three artists featured in a new show called Escape From The Landfill at the Huntington Beach Art Center. Photo taken on Tuesday, July 10. (Scott Smeltzer)] *** []

In the word of Bill Dyrness in our anniversary issue, “Olga Lah did not start out wanting to wrap buildings in electrician’s tape, fill huge spaces with billows of crumpled paper, or line galleries with great swathes of plastic bottle caps. She did not set out to be an artist at all—let alone one catching the attention of the art world in Los Angeles and even Europe. But, ten years after graduating from college, this is what she has become… Two themes permeate Lah’s work: the ordinariness of the stuff of our lives, and its resulting temporality. Her work highlights, even celebrates, the significance of the physical. And she has a soft spot for quotidian materials—which she thinks make art accessible to people who might not otherwise enter a gallery. But the magic of her work lies in the way this common material can be brought to life, transforming itself and forcing us to experience physical objects, and our own physicality, in new ways.”

Some of Lah’s work is in Image issue 80. Read here.

Olga Lah is a second generation Korean-American, born and raised in the Los Angeles area. She now resides in Long Beach, California. She received a B.A. in both Studio Art and Art History from the University of California at Riverside. She also received a M.A. in Theology from Fuller Theological Seminary. Her interest in the relationship between theology and art led her to an art practice exploring these themes in site-specific installations and sculpture. She has exhibited most recently at the Craft and Folk Art Museum, Los Angeles; the Torrance Art Museum, Torrance; and at the Venice Arsenale in Italy. She has been awarded residencies at Art Stays in Ptuj, Slovenia and at the prestigious Djerassi Resident Artists Programs in Woodside, California.

I am currently working on projects that engage architectural structures and forms. I am interested in building installations that bring emphasis to elements of a structure and that alter the context of a space. I want to continue a similar investigation into physical landscapes—urban, suburban, rural, fringe areas—to create unexpected encounters that invite the viewer to make new connections within an environment. I am consistently looking for new sites to create pieces that have a unique relationship to a place. Though my installations have been based in temporal materials I am moving into the exploration and fabrication of permanent works for public commissions and developments. I aim for my work to continue to question perception and perspective while seeking experiences of transcendence.