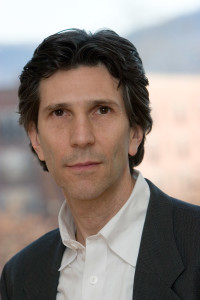 Richard Michelson is one of those rare writers who not only understands that comedy and tragedy are close neighbors but also enables you to feel that mysterious juxtaposition. Take his poem from the 20th Anniversary issue of Image, “Another Holocaust Poem.” As he sits writing a poem, Michelson is reflecting on his childhood and family life in Brooklyn, the horrors of the Holocaust and the anti-Semitism of poets who ought to be among his heroes—Ezra Pound and T.S. Eliot—when his son knocks on the door to ask for some pocket money. “Are you writing another Holocaust poem?” the boy asks. And of course the answer has to be yes: what poem by a contemporary Jewish writer can evade the shadow of that event? The problem is that at this distance it can be nearly impossible to find the right stance from which to address the horror and absurdity of it. Comedy and tragedy meet in the absurd, as Michelson’s beloved Kafka knew so well. So the poet sits at his desk, flanked by “the Angel of Death and the Angel of Forgetfulness, / those vaudeville comics,” striving to remain human in front of terrifying mysteries. The beauty of Michelson’s writing—whether it is in poetry or in his many award-winning children’s books—is that he always finds the human note, however paradoxical or ambivalent that note might be. While he is too honest to offer us cheap grace, Michelson does seem to find glimpses of a transcendent order in the midst of our world—a place where comedy and tragedy do not merge into one another but instead dance a pas de deux of appalling beauty.

Some of Michelson’s work is featured in Image issue 60. Read a poem by Michelson here.

Richard Michelson’s poetry collections include Tap Dancing for the Relatives two limited edition fine press books with the artist Leonard Baskin, Masks, and Semblant, and most recentlyBattles & Lullabies (U of Illinois Press, 2006). Michelson’s poetry has appeared in many anthologies, including The Norton Introduction to Poetry and Blood to Remember: American Poets on the Holocaust. Clemson University named Michelson as the Richard J. Calhoun Distinguished Reader in American Literature for 2008. Michelson’s latest children’s book, As Good As Anybody: Martin Luther King and Abraham Joshua Heschel’s Amazing March Toward Freedom, was awarded the 2009 Sydney Taylor Award Gold Medal from the Association of Jewish Libraries, the most coveted award for writers of Jewish children’s literature, and A is for Abraham was awarded the Silver Medal. This is the first time in the award’s 41-year history that one author has been honored with the top two awards. Tuttle’s Red Barn won Publishers Weekly Best Children’s Book of 2007 and Across the Alley was a 2006 National Jewish Book Award Finalist. Too Young for Yiddish won the 2003 Skipping Stones Magazine Multicultural Honor Award and was recently recorded by Leonard Nimoy.  Within the past 3 years Michelson has lectured and read from his works in India, Russia, Eastern Europe, and throughout the US. He represented the United States at the 2005 Bratislava Biennial of Children’s Books in Slovakia. Michelson is the Curator of Exhibitions at The National Yiddish Book Center and owns R. Michelson Galleries in Northampton, Massachusetts, which represents many of the country’s best known artists, including longtime Glen Workshop faculty member Barry Moser.

At the moment I am doing the final revisions for two children’s books due out in 2010. Busing Brewster (Knopf) is about a black child bused to an all white school in the 1970’s. Lipman Pike: First Professional Baseball Player and Jewish Home Run King is set in the 1870’s, and the title says exactly who/what it is about. I am also beginning a book about Eunice Williams, who was captured by Roman Catholic Mohawk Indians in 1704, and when offered the opportunity, refused to return to her Puritan home. On an essay front, I am writing about racial politics, and the transformation of Jews in America from non-white to white status. I am also planning upcoming gallery exhibitions and most importantly, I am working on poems for my next poetry collection, very tentatively titled Dead Negro (and including the two poems in Image).