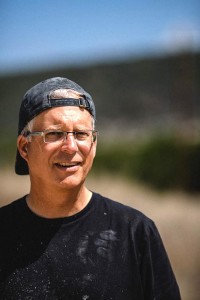 We can’t really tell you what Roger Feldman’s sculpture is like, and pictures won’t help you much either, because to understand his work you need to walk on it, but his room-sized sculptures are so strange and profound that we decided to feature him in our two-dimensional format anyway. Roger’s pieces are much more than visual. The real substance of a Feldman sculpture is not the piece itself but the interaction between the piece and the viewer’s body. His room-sized installations use kinetic and visual cues to move the viewer through a series of sensations—security and insecurity, privacy and exposure, balance and unease—that create a narrative at once physical and theological.

Some of Roger Feldman’s work is featured in Image issue 30 and issue 65. Read some of his work here.

Roger Feldman received an NEA Individual Artists Fellowship Grant in 1986. His site-specific sculpture has appeared in numerous solo exhibitions in the United States and England, including at the Los Angeles Municipal Gallery at Barnsdall Art Park. A permanent site-specific piece appears in the collection of the Washington State Arts Commission. Images of his work were recently featured in an article in the Los Angeles Times Magazine. He completed his B.A. in Art Education at the University of Washington in 1972, and his M.F.A. at Claremont Graduate University; Claremont, California in 1977. He currently teaches at Seattle Pacific University.

Currently I am working in several directions simultaneously. I am working with kinesthetic and visual perception as elements in the production of two-dimensional digital drawings. These works will be reproducible in the digital environment and result in archival-framed prints. I continue to create small-scale maquettes that explore the possibilities of both material, kinesthetic sequence, and symbolic space. Of course, the viewer is an active participant or at least an implicit participant in all of these works. I also have several irons in the fire for future site-specific pieces that are a good year and a half away, as well as working with a private university in developing a plan for a public art collection.