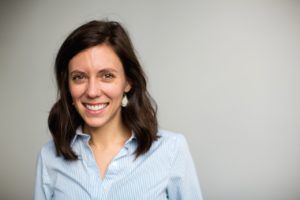 Her presence has a grounding effect. It seems to settle a room, deepen it, prepare its people for the wildflower-growth of conversation. Sonya Bilocerkowycz writes and exists in a way that calls her witnesses to more carefully examine their own histories. She documents the myths we live through. She articulates error in a way that forgives our inattention. And she allows admission that the time for understanding is not all times, though it may draw upon them.

In “Veselka,” her most recent essay to appear in Image, Sonya weaves such threads of time as a Ukrainian creation story, her grandmother’s funeral, a Wisconsin soccer camp, a Manhattan restaurant, and a country’s tenuous history. With an artfulness that surprises me each time, Sonya is able to acknowledge previous disinterest without shame. She recalls sitting atop a memorial rock at her old camp with the boy who has blue-yellow eyes. The rock is dedicated to millions who died in the Soviet-engineered famine called the Holodomor, but sitting there she is “so busy kissing the bacon-rain-tie-dye boy that you forget about the genocide.” Even as she remembers the unknowing, though, she does not allow her readers to slip by in that same state. You forget, yes, but the word “genocide” and its explanation immediately follow. A former reporter for the Catholic News Agency, a gifted teacher, and an exacting writer, Sonya may forgive your former disinterest, but her passion and research and deeply moving art will not allow you to stay disinterested for long.

As Image prepares its hundredth issue for print, I cannot think of another person I would rather uplift as our final Artist of the Month. Sonya is brilliant and kind. It was an honor for us here at Image to work with her last year when she served as our Milton Fellow. She strives to create a better world and to create better people. And our goal, always, is to create a space for artists like her.

Sonya Bilocerkowycz is the author of On Our Way Home from the Revolution, a collection of linked essays forthcoming in 2019 from Mad Creek Books/Ohio State University Press. Previously, her work has appeared in Colorado Review, Guernica, The Southampton Review, Crab Orchard Review, Ninth Letter, and elsewhere. Before completing her MFA at Ohio State, she served as a Fulbright Fellow in Belarus, an educational recruiter in the Republic of Georgia, and an instructor at Ukrainian Catholic University. She was the 2017-18 Milton Fellow in Creative Writing at Image/Seattle Pacific University.

I’m just finishing up final edits on my forthcoming book of essays. For that project I’ve spent the past five years immersed in Ukrainian history, from the early Soviet period through today—which has been fascinating and exhausting. It is a blood-soaked story, and I’m glad to have a chance now to take a break from it. I’m running out of words to describe such things.

I have a few standalone pieces in the works: An essay about a fentanyl overdose at a prison in Ohio. Another on a Croatian priest who claims to have received the stigmata. A lyric project about the psychological toll of surveillance. I’m so grateful I have the time now to follow these weird ideas down their respective rabbit holes. Although the topics feel like a departure from my book on Ukraine, I’m also noticing some recurring themes. My work is obsessed with questions of responsibility, and it seems that no matter what horror my narrator examines, she can’t help but wonder at her own complicity, too. I imagine this preoccupation will stick around for a long time, even as I search for new vocabularies to render it.