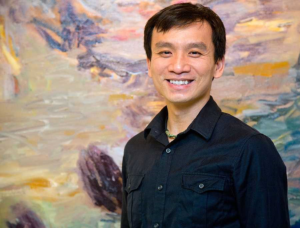 It is impossible to exchange even a few words with Trung Pham without being warmed by the depth of his sincerity. It emanates from his body, and from his body of work: paintings, sketches, and sculpture. His paintings are deeply relational, even in collections such as Crack or Wound, one sees opposing sides yearning toward each other in vibrant colors across the fissures. Such relationality is apparent, too, in his work painting mother and child—a recurring theme in his painting influenced by his own experience with the women in his life. Pham was raised primarily by his mother and grandmother while his father was imprisoned in a re-education camp in Vietnam. He saw firsthand the strength, love, and resilience of displaced mothers. He saw their hope. He infuses this hope into his art, and it glows back out in bright, bold colors. Pham sees his work as healing witness to the “restless Vietnamese Americans who courageously withstood suffering and kept their faith, hope, and love alive.” And shouldn’t that be the purpose of art? To heal. To witness.

Read our essay about Pham and two other Jesuit artists here.

Trung Pham was born in Saigon, Vietnam, in 1974. He came with his family to Orange County, California as a refugee in 1990 through the Humanitarian Operation, which allows re-education camp prisoners and their family members to immigrate to the United States. His father had been kept in the re-education camp for six years following the Vietnam War. Pham studied Chemical Engineering at UCLA, and soon after graduation he joined the Jesuit order and pursued a career in the arts, earning a MFA in drawing and painting at the Pratt Institute in New York City. He also received his MDiv and STL in Theological Aesthetics from the Jesuit School of Theology in Berkeley.

Pham’s refugee experience and religious devotion have profoundly influenced his artistic practice. His miniature sculptures capture the fragility and delicacy of everyday objects that evoke sensibility and feelings of intimacy.  His paintings explore the theological theme of beauty in brokenness in a series of vividly colored and densely painted organic shapes. He has been awarded residencies at Fuller Theological Institute, Washington; Grunewald Guild, Washington; and St. Joseph’s College, Bangalore, India. Pham is currently a member of the advisory committee of George Tsutakawa Art Gallery at the Wing Luke Museum, Seattle, and an associate professor in the Art and Art History Department at Seattle University.

Besides art teaching and making, he also enjoys running. He runs to promote spiritual/healthy living and fundraise for non-profit organizations. He has finished 16 marathons to date, including the Seattle, Los Angeles, and Eugene marathons.

His commissioned works include the Saint Clare bronze statue at Santa Clara University, California and The Crucifix at Seattle Preparatory School.

I am currently working on painting series of Vietnamese mother and child for the exhibition “Gaze” at the Benedictine Center in Saint Paul, Minnesota, in the fall of 2018. This show includes ten oil paintings from 6×6 inches to 30×40 inches.

This is the third exhibition in which I have explored this subject, mother and child, and I have not exhausted its meanings. I guess it is because my childhood was wrapped up in the diligent care and unfailing love of my grandmother and my mother. Both of them lived through the wartime of Vietnamese history. They faced numerous tragedies and heartbreaking events including displacement, loss, compromised social status, and health challenges. Though they suffered various traumatic experiences, their love for their children never wavered. And because of their unfailing love, they open up possibility and hope for the next generation. This concrete and profound experience also leads me to experience God and find my religious vocation.

In my paintings, I have utilized different brushstrokes, various color palettes, and multiple perspectives in an attempt to provide viewers with diverse visual interests and to compel the viewers to experience the deep emotional and profound love of the mother.