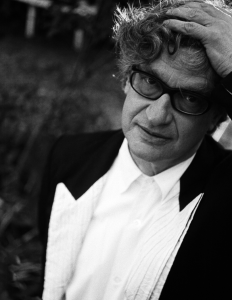 That one of Wim Wenders’s production companies is called “Road Movies” is no accident, no casual moniker. The central metaphor in nearly all his films is that of a lone figure on a journey, even if the destination is not known. Like Walker Percy’s character Binx Bolling (from The Moviegoer), Wenders’s protagonists are on a “Search.” find a direction, a dimly sensed goal, even if more time on the road is necessary. Whether it is Harry Dean Something has propelled them onto a path. The great thing about his films is that he never rushes his searchers; their adventures are picaresque and unfold with the sort of randomness we experience in daily life. Yet they do Stanton giving his son back to his estranged wife in Paris, Texas and then setting off again, or the angel Damiel (played by Bruno Ganz) choosing to become human and experience the world in a new way (in Wings of Desire), or Howard Spence (Sam Shepard) in Don’t Come Knocking attempting to go home again, each character starts as a wanderer and becomes a pilgrim. Image is proud to have one of the world’s greatest film directors, Wim Wenders, as an Editorial Advisor, and, more importantly, as a friend. His integrity, his unwillingness to make clever or flashy films, stands as a beacon of artistic hope to those who have a vision but may be afraid to pursue it. Wenders is on the pilgrim road, aware of journey’s end in the distance, but fully willing to give himself up to every moment of the trip.

Some of Wenders’ work is featured in Image issue 55. Read an excerpt by Wenders here.

Wim Wenders was born in Düsseldorf, Germany in 1945. One of the most influential figures of the New German Cinema in the Seventies, his films––among them The American Friend (1978), Paris, Texas (1984), Wings of Desire (1987) or Buena Vista Social Club (1999)––have won numerous prestigious awards and international critical acclaim. A major survey of Wenders’ photography, Pictures from the Surface of the Earth, has toured museums and art institutions worldwide since 2001. Wim Wenders has also published numerous books of essays and photographs. He lives in Los Angeles and Berlin with his wife, photographer Donata Wenders. He is President of the European Film Academy, and member of the order “Pour le Mérite”.

I am currently finishing a film project that was mainly shot in Italy last year. It’s called Palermo Shooting and features German punk rocker Campino, the Italian actress Giovanna Mezzogiorno and the great Dennis Hopper. I am also working on a new photography show, and my future film projects include a thriller in Tokyo entitled Miso Soup and an adaptation of Walker Percy’s magnificent novel The Second Coming, to be shot in the Carolinas. I am also teaching “Digital Cinema,” as a professor at the Hamburg Art School.