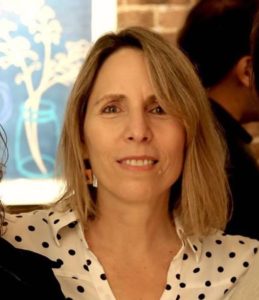 “Identity is a stone, he’d say. They’d write these words in their notebooks, pens hissing like insects scuttling across paper. America is a river that wears it away.”

These lines from Zeeva Bukai’s story “Like Water on Stone,” as it appears in Issue 95, demonstrate the simple beauty of Bukai’s writing, which allows readers to glide from word to image seamlessly. The image of running water flows through her story, standing in for body, emotion, and nation. But the idea of an identity worn by place or floundering and drifting without mooring is not limited to this work of hers in particular.

Bukai came to the United States from Israel when she was only four years old: her mother tongue has become American-accented. She knows the “nether space” between two homes, and in that space she creates both longing and hope.

Her writing is rich with revelations and re-evaluations, truth from flawed characters, and a yearning for land, even imperfect. And Bukai herself is rich in grace. As she serves those around her as an academic support specialist, a mother, and an artist, grace, like water, saturates her work.

The first book I read on my own in English was “Little Bear,” by Else Holmelund Minarik. I was in the first grade and our teacher took us on an outing to the local library. By that time I had lived in America three years. I was born in Israel and was four when my parents and I immigrated to Brooklyn, New York. I adored the Little Bear books because of the loving, kind, and empathetic relationship Little Bear had with his mother who accepted him no matter his eccentricities, his otherness. He is an imaginative bear who must learn to navigate the world outside of his home, the way I was learning to navigate the new world my parents had brought me to.

In Israel, we lived in a small suburb outside of Tel-Aviv. People kept their doors open. There are photographs of me as a child in the park winter and summer, on a kibbutz visiting a beloved uncle. I am there in the chicken coop, trying to pet the chickens, and sitting in a field of daisy’s; my mother is out of the frame making a flower crown. There is also a photo of me in a jester’s costume for the Purim holiday, when Jews celebrate the demise of the tyrant, Haman, and Queen Esther’s courage. I have looked at these photographs all of my life, trying to capture what it was like to know my place in the world, to know where I belonged.

When I was eighteen, I returned to Israel to study at Tel-Aviv University. I had thought to study English Literature. Instead, after a preparatory year of Hebrew, I went on to study acting and continued studying theater when I returned to the U.S. four years later, receiving a BFA from Brooklyn College and then an MFA in Fiction Writing.

What became most clear to me was that in Israel I was an American, and in America, I was kind of Israeli. I have always navigated between two worlds, two languages and cultures. Hebrew is my mother tongue, but after being in America for decades, I have lost much of it and speak with an American accent. English is the language I write and think in, though I often shift between the two. I straddle both languages, both cultures and am at home in the nether space between America and Israel.

I began teaching writing at Brooklyn College and then later at a yeshiva high school for girls. It was there the seeds to my story “Like Water on Stone,” were sown. Currently, I’m an academic support specialist working with a diverse adult population at SUNY Empire State College. I live with my husband in Brooklyn, and have two daughters. Outside of family and writing, I’ve always loved ceramics and created a studio in my backyard. When I am not writing or teaching, I am making pots.

My stories are forthcoming in JewishFiction.net, and an anthology titled Out of Many: Multiplicity and Divisions in America. My stories have appeared in Mcsweeny’s Quarterly Concern, Image Journal, December magazine, Flash Fiction Magazine, WomenArts Quarterly Journal, Calyx, Lilith, Heeb, The Jewish Quarterly and elsewhere. My story “The Abandoning,” featured in 2017 in December magazine, won the Curt Johnson Prize (judged by Lily King) and was nominated for a pushcart prize. My stories have received honorable mention in Glimmer Train and won the fiction award in Lilith magazine and the Irwin Shaw award. I was a fellow at the New York Center for Fiction and hold an MFA from Brooklyn College. I teach writing and am the academic support specialist at SUNY Empire State College in NYC. I am at work on a novel and a collection of linked stories about the immigrant experience.

The project I am currently at work on is a novel titled, “The Street of Shoes.” The novel weaves the stories of Sonya and Maya Sasson. My hope is that it tells something about the Jewish Diaspora in the 20th Century, and a return to a homeland. The story deals with identity, memory, and loss. It is a story about two children whose parents are immigrants in America and how their lives are changed when their mother dies and their father sends them to live in Israel. The things I am most interested in are: how is our identity shaped when we are the children of immigrants, and then immigrants ourselves? How do we deal with personal loss and collective loss? What does homeland mean? How do we define home and lay roots? In what way are we shaped by history? How does war effect the collective psyche of a country, of a people, and the individual? How do we deal with the “other?” Finally, I believe the book discusses the importance of family and how love keeps us grounded.

Below is a synopsis of the story.

In March 1983 before Sonya Kantowicz Sasson dies, she leaves a collection of notebooks to her teenage daughter, Maya. In trying to heal her daughter’s pain, she reveals her own life. The notebooks tell the story of her childhood in a labor camp in Kolyma, Siberia during the Second World War. Her beloved father, drafted into the Red Army, never returns to the camp, leaving Sonya and her mother, Berta to fend for themselves. At the end of the war, they hear a rumor that the father may have survived and escaped to Palestine. It takes two years for them to obtain visas to Israel. More than anything in the world Sonya wants to find her father and recreate the loving family they had before the war. However, by the time she and her mother find Herschel, he is living on the Street of Shoes with another woman. That relationship threatens to destroy the home and family Sonya longs for.
After Sonya’s death, their father Benny sends Maya (18) and Eben (14) to Israel to live with their aunt and uncle who are grieving the loss of their only son killed in the first Lebanon war. Her mother’s one request is that Maya and Eben stay together, but Maya’s goal is to return to NYC, complete her senior year of high school and enter art school. In a matter of weeks, it becomes apparent that aunt Sigal cannot bear to have Eben In the house. She sends him to a kibbutz in the Negev desert. Though troubled by the separation, Maya cannot help feeling resentful; Eben has always been difficult, rather slow, and this is another example of how taking care of him has derailed her life. Her intentions are to leave Israel when Eben is settled, but Maya’s plans go awry when after a weekend visit, Eben disappears.
Maya’s story begins with the search for her brother. Maya travels to the north and south of Israel. Each person she meets brings her one-step closer to finding Eben and understanding the land her parents loved and left behind. From her aunt and uncle, she learns about sacrifice. From Yossi, a man who picks her up hitchhiking, she learns about love and the price Israelis pay for war. Khaled Hamdi, a Muslim patient in a Christian Hospital, teaches her the meaning of home, and from the Ethiopian woman who lives in her mother’s old apartment on the Street of Shoes, she learns about the extraordinary lengths people will go through to reach the Promised Land. Most of all, in searching for Eben she learns the importance of family and how identity is rooted in the ones you love and in the place you call home.