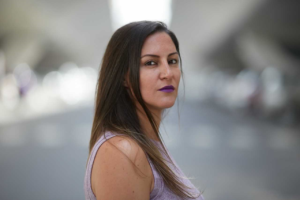 “If I keep still / long enough, I hear the music inside / my veins; it sounds like women, singing.” These closing lines from Zeina Hashem Beck’s poem “Layla” reveal her gift not only as a speaker, but also as a listener—an apt role for the woman who founded PUNCH Poetry Dxb open mic night in Dubai. A woman of three languages, English, French, and Arabic, Zeina has a way of translating reality to verse that transcends the individual words themselves and lives in their relation. Much of her recent work slips between English and Arabic in a bilingual form she refers to as “The Duet.” It’s a fitting name considering the musicality of her writing and her ability to welcome the other into conversation. Her voice as a poet resounds loudest in the spaces or tensions between subjects. As a reader, expect her to fill up the silence between you and page. Expect the page to listen, too.

Read her essay as it appears in Issue 96’s “Repeatable Surprise: Poets on Their Favorite Hymns and Spiritual Songs.”

Zeina Hashem Beck is a Lebanese poet. Her second full-length collection, Louder than Hearts, won the 2016 May Sarton New Hampshire Poetry Prize. She’s also the author of two chapbooks: 3arabi Song, winner of the 2016 Rattle Chapbook Prize, and There Was and How Much There Was, a smith|doortop Laureate’s Choice, selected by Carol Ann Duffy. Her first book, To Live in Autumn, won the 2013 Backwaters Prize. Her work has won Best of the Net, has been nominated for the Pushcart and the Forward Prize, and has appeared in Ploughshares, Poetry, the Academy of American Poets’ Poem-a-Day, and World Literature Today, among others. Her poem, “Maqam,” won Poetry Magazine’s 2017 Frederick Bock Prize. She lives in Dubai, where she has founded the poetry open mic night PUNCH Poetry Dxb.

Perhaps my current project is learning not to have “current projects.” I’m very grateful that 2016 brought with it the publication of two chapbooks, 3arabi Song and There Was and How Much There Was, and that in 2017 I released my second full-length collection, Louder than Hearts. This was wonderful and intense; now I feel like I need to pause and listen. Perhaps my current project is pausing, not immediately attempting to organize new poems into a new collection or even submitting them to as many literary magazines as I would have in the past, resisting the almost-capitalistic urge to produce produce produce. I’m walking, reading, sitting by the beach, listening to music, playing with my kids, going out with my friends. I’m exercising regularly for the first time in about 9 years, learning to listen to my body through yoga. I’m smoking a lot less than usual.

The new poems I’m writing seem to be about the divine, the body, love, family, and friendship. I also seem to be experimenting with a bilingual Arabic-English form that I call The Duet. The writing is slow, though I believe there will come a time when I’ll be writing more intensely, obsessing more. But perhaps I’m tired of “obsessing.” Perhaps my current project is to work slower, with more intervals, trusting that the writing doesn’t have to consume me. Perhaps I’m wrong and it will.

Many of my notes contain the word “ode.” In fact, my new poems are in a folder on my desktop called “ode to the afternoon.” Perhaps I feel I’m in my afternoon, full and slightly lethargic. On the other hand, the afternoon has always been my least favorite time of the day, a period during which I typically feel a little lost and empty. My mother says I cried a lot in the afternoon as a child. Perhaps my current project is learning to love and trust the afternoon.