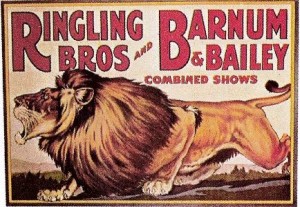 To tame a lion, you need a good chair.

That’s one of the lessons that Dave Hoover, a wild animal trainer, shares in Errol Morris’s documentary Fast, Cheap and Out of Control.

Why a chair? Because, he explains, a cat has only one point of interest. If a lion’s charging at you, it’s best to shove four points of interest into his face. Presented with the four focal points of the chair legs, that lion becomes confused and forgets his primary thought—“Eat the man in the white pants!”

This works, by the way. I’ve tried it with my housecats. And yet it only just occurred to me—as I wrote these words to begin this article—that Errol Morris is thrusting four focal points at his audience: four men, representing four vocations.

Does this confuse and neutralize us the way the four chair legs baffle and frustrate the lion?

No, it does not. It did not silence and confuse the sixteen people who watched the movie with me in the Glen Workshop Film Seminar a few weeks back. It awakened our powers of observation. It inspired us into hours of exciting conversation.

To prepare my sixteen “seminarians” for this film, I first showed them a fantastic short called “Words.”

“Words” is made up of a stream of seemingly unrelated, ordinary moments. But as most viewers watch these five minutes flash by, there comes an instant when they notice that something special is going on. I watched this happen in the Seminar. The viewers sat up. Their eyes widened. Some leaned forward. They begin to pay closer attention.

“Words” does not explain its secret; it waits for the watchful viewer to discover it. Some notice the movie’s genius right away. Others can watch the whole thing without “getting it.”

But when the audience does catch on to what is “really going on,” and they begin tracing the invisible lines of connection between the images, the movie becomes very exciting.

Watching “Words” is good practice for watching Errol Morris’s four interwoven interviews. I believe Morris is asking us to think about life in a way that only becomes visible through this unique combination of testimonies.

Morris’ four subjects are a lion tamer, a robot builder, an expert on the naked mole rat, and a topiarist (a guy who prunes bushes into the shapes of animals).

Quite a variety. But as they share their stories, we discover remarkable correlations and contrasts between their experiences and perspectives. They’re just talking shop, but they’re really speculating about life—its purpose and meaning, its driving forces, its origins, and where it is going.

Morris refrains from comment. He just silently shifts from interview to interview, letting us find our own insights. He’s a master at this. And this film is a fine showcase for his innovative interview style: The interviewee talks directly to the camera, but they’re seeing Morris, not the camera.

As a result, they’re expressive and their eye contact is bright and sharp. One of the film’s greatest joys is its gallery of lively faces—especially the wild-eyed enthusiasm of robot scientist Rodney Brooks.

And as they share their generalizations about human nature, their fantastic personalities prove that each individual human being is a mystery and a miracle.

We watch Dave Hoover get emotional over the loss of his mentor, the wild animal trainer and silent movie star Clyde Beatty, and our host doesn’t need to say anything—the lesson is clear. For all of our speculation about evolution’s “progress,” we get the strong sense that each human being is unsurpassable, irreplaceable.

I chose Fast, Cheap and Out of Control as the first feature film of this week-long seminar. Our theme was “Acts of Attention”—a study of artistic concentration. So why start with this movie? My reasons became obvious to the viewers fairly quickly. Each man’s story is, in a nutshell, every artist’s story.

All four experts work within maddening constraints, facing formidable obstructions. All of them are powerful observers, and they learn through trial and error.

Like Ray Mendez, who enjoys listening to his naked mole rats “sing,” all four men take obvious pleasure in the mysterious aspects of their work. And each expert shows us specific tools of the trade that give them a measure of control over their subjects—chairs, whips, computer codes, electricity, cameras, environmental controls, shears.

But they all tell stories about occasions when something beyond their control took over—a power failure during a lion-taming act, for instance, or a catastrophic storm that destroyed a carefully sculpted “giraffe” bush. And all four respond to challenges with creativity and enthusiasm.

Morris himself is a magnificent artist. Pay attention to his clever editing. As the lion tamer talks about training wild animals, what are we watching? Footage of robot designers at work. Ray Mendez explains that his vulnerable vermin are happy to be caged so long as they have their favorite creature comforts—and Morris, meanwhile, shows us pictures of people watching the circus, eating popcorn, and slurping soda.

Fast, Cheap and Out of Control convinced me that a documentary can be a poem.

It glows with Morris’s affection for his four eccentric stars. Without saying a word, he shows us that we are more than mere machines running on complicated codes. We are living mysteries.

Even the robot maker admits that, at the end of the day, for all that he has learned about the causes of our behavior, he still believes many of the things most of us believe about God, love, and freedom. He and his fellow dreamers demonstrate that, while humankind can be a carnival of folly, we are at our best when we investigate mysteries with courage and creativity.

In the same way, my new friends in the Glen Workshop Film Seminar stepped into our four-walled classroom for three-hour sessions every day for a week. We picked up our tools, sharpened our attention, and carefully, respectfully, and lovingly wrestled with challenging movies.

And we went away wide-eyed, wiser, and more excited about what we can see when we train ourselves to look closer.

One wrote to me, “I am going to re-watch all the films with my husband, to see what more can be found.”