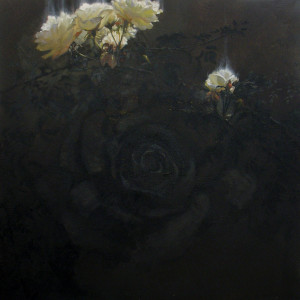 In a recent painting by Melissa Weinman, a small, white rose floats over darkness. The rose is in full blossom, almost blown, and crowned by a pale fire rising from its petals like mist.

The effect is arresting, almost hallucinatory, but this is not an image that is merely unusual—a pretty flower on fire. Instead, the painting holds us in abeyance. We enjoy both what we can see and what escapes us. We have the sense that this is not the odd, passing moment but a steady state, something more than physical that is burning with something more than fire.

The painting’s title, “Even the Night Shall Be Light About Me,” a quote from Psalm 139, directs us to think in terms of sacred art. But to better understand this image and the beauty it portrays, we also need to approach it as art deeply informed by the spiritual life of the artist.

The notion that “painters paint themselves,” at least in physical ways, has been around since the days of Da Vinci and Michelangelo. But in the twenty-first century, critics and viewers in general are wary of considering art as any kind of spiritual autobiography.

Certainly, the hazards of this approach are obvious. Art that tries to be spiritual can be like political art, often preaching to the choir and justifying clichés or sloppy craft in the name of a Higher Purpose. Besides, the devil has the best music, as Luther said, and spiritual growth doesn’t necessarily lead to artistic growth. We can all think of painters and other creatives where the work is brilliant but the personal life is questionable—and vice versa.

Weinman has long been recognized for her representational paintings and figurative studies. I would argue, however, that we can’t really understand what she is doing as a painter without considering her life of faith.

Looking at the body of her work over thirty years, I believe that it reflects an evolving relationship with the divine, based partly on her life experiences and partly through prayer and study. The result is a career where, as she puts it, her paintings have influenced her faith even as her faith has helped change the scope and direction of her painting.

Born in a small town on the Minnesota prairie, Weinman says that she grew up in her mother’s art studio. “My mother didn’t give me formal lessons in art, but she taught me to see, to take in the world through my eyes. She was always saying ‘Now look at that!’ and what she was pointing out was always beautiful.”

After completing a double major in art and Chinese at Bowdoin College, Weinman earned an MFA at the University of Southern California. Although raised as a Methodist, she had drifted away from the faith of her childhood.

At the same time, she never lost sight of the larger questions involved with faith such as mortality, impermanence, and the possibility of an absolute truth. At USC, she worked on a series of vanitas images, large pastel drawings that contained references to Raphael’s fresco “School of Athens”: cut flowers, a skull, and so forth. Her thesis show included paintings of twin images—the same model pictured twice, with one figure confronting the other, as if, as she puts it, “a voice of conscience.”

By the 1990s, Weinman had developed a successful career as an art teacher at the university level and she was gaining attention for her figurative work, especially for a series of paintings of saints and martyrs done in an original, some would say quirky, style.

Her Saint Sebastian was shot with arrows but wearing camouflage cutoffs. Clare was depicted in front of TV screens and holding a little TV set with a burning candle inside. The images were often dark—Agatha with a bloody shirt, her breasts shorn, Lawrence burned horribly by fire, and Lucy holding her eyeballs that had been gouged out in what looks like a silver platter.

Most viewers assumed that these paintings represented a faith that was, if not Catholic, certainly Christian, but that was not the case, according to Weinman. “I was dancing around Christianity because I’d been painting these martyred saints,” she says, “but I felt Christians were really kind of spooky. I was trying to be very postmodern at the time, making visual puns and playing off how bizarre their stories were.”

When Weinman learned that Lucy is the patron saint of vision, she created a triptych of the saint with a bunch of carrots in the left-hand panel and an eye chart on the right. But as she kept learning more about the saints’ lives, her attitude began to change. “I became very moved by them, by their suffering, and it began to seem wrong, somehow, to be punning and playing like that.”

In 1997, Weinman went to Europe to study art on a two-month fellowship. Although her professional career was moving ahead, she had just ended a long-standing relationship and she felt that her personal life had reached the end of a chapter. “Something had started turning inside me,” she says, “but I didn’t know what it was.”

On a cold evening while traveling to Germany, she found herself alone in a church and then she knelt and began to pray. “I was amazed at what I was doing. Growing up, I had the notion that Jesus was God and God was scary because He judged everyone,” she says.

In the church, however, she felt a presence behind her. “It’s like that saying ‘I have your back.’ I felt that all I needed to do was lean back into this presence and I would have the strength to do the right thing from then on.”

In the days that followed, this sense of presence remained, and she was drawn in particular to the image of Mary of Mercy, known in Germany as the Schutzmantelmadonna (sheltering-cloak Madonna). “I felt this immense grace from Mary,” she says, “that I was safe and I felt loved and welcomed.”

Later she would paint a large triptych of the Schutzmantelmadonna, her cloak spread over a crowd of men and women, including the artist herself in a painter’s smock. At the bottom of several portraits she painted of Mary, she inscribed in German, “Mary Helped Me.” One of the portraits was donated to hang in a Marian Pilgrimage chapel in Schwandorf.

Richard Cole is a painter and the author of two books of poetry: The Glass Children and Success Stories. He has also written a memoir, Catholic by Choice, published by Loyola Press.