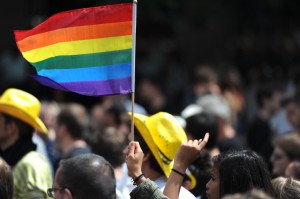 I was in tears watching my city’s Gay Pride parade go by this year. Yes, tears. Here’s why.

In the late 1960s, a friend in my graduate school program was gay. But at that time, there was no such thing as “in” or “out” of the closet. There wasn’t even a closet…or there couldn’t have been one huge enough to hold all the gay people who had to keep their sexual lives secret. Not even a barn would have been big enough. Maybe a stadium…

Instead, there were the baths. I don’t know if these gay baths were really baths, or pools, or what. All I know is that this is where my friend Mark would go every evening, picking up each evening a different man to spend the night with.

Only a few of us, his closest friends, knew about his hidden life. He didn’t dare expose it to anyone beyond us. In society’s eyes, to be gay was to be perverted, sick, evil. So he had to hide it. And what a toll this took on him. The secretiveness imposed on him by society seeped out into his other relations. He became gossipy, back-biting. He became an alcoholic. Within ten years he’d killed himself late one night in a drunken crash into his own garage.

In the early 1970s, a few years before my husband and I moved to Rochester, New York, where we still live, a local public school teacher named Tim Mains walked into his classroom to find the word “faggot” written on the blackboard. The shock led to his agonizing decision to come out.

Even after this act of bravery, Tim would hear gay slurs hurled at him regularly. So imagine how courageous it was of him to run for Rochester City Council in 1985. He won, and became the first openly gay man in New York State to be elected to public office. I didn’t know Tim at the time, but I voted for him simply because he’d come out as gay. I wanted someone with that courage and integrity to represent me on City Council.

That was exactly thirty years ago. I later met Tim when he was dating my neighbor David. I did a reading at their wedding ten or fifteen years ago (my memory of dates is hazy). The ceremony had to be in Canada (they hired a bus for all the guests) because New York didn’t pass its Marriage Equality Act until 2011.

Before the passage of this Act, our city’s annual Pride march was a pitch for votes for this legislation. Since 2011, the march has been a celebration. This year’s parade, with its joyous shouts of “Happy Pride,” seemed especially celebratory, following as it did the recent Supreme Court decision striking down state bans on same-sex marriage.

For a solid one-half hour, group after group marched by me and the rest of the crowd of spectators. Some of the marching groups I’d expected: the Gay Men’s Chorus, the Unitarian Church, student groups from a couple of area colleges. But how about:

The United States Department of Veteran Affairs, its sign saying “We serve all who served.”

Several unions, including the Teachers’ Union, the United Automobile, Aerospace and Agricultural Implement Workers of America, and the Teamsters Union (with a huge “PRIDE” painted on the side of their truck).

Many other churches—though of course none of my own denomination: Catholic (though hardly catholic).

Every local politician up for office, including the most conservative ones.

The crowds lining the street—including lots of straight families with their young kids—were exuberant. Rainbow flags were flying by the hundreds. Rainbow necklaces were tossed into the crowd of spectators. One marcher had dyed her hair in rainbow colors: a perfect image of the joy shared by all, marchers and spectators together.

This is why I teared up watching the marchers go by. With the Teamsters and Time Warner joining the festivities, clearly gayness had become mainstream. A long, demeaning battle for human dignity was nearly over. (Earlier that week I’d seen a roundtable of people on a thoroughly mainstream NBC daytime show extolling the courage of transgender athlete Caitlin Jenner’s speech at the ESPY Awards.)

But I say “nearly” over because there are still some folks unhappy about “Happy Pride.” When the parade reached its final destination, a handful of protesters carrying signs saying “Jesus Saves” met the marchers disapprovingly.

But that’s just a handful, and I don’t believe it will ever again be more than that. This is what my tears were telling me. I remembered the oppression that Mark had suffered. I remembered Tim’s challenges when first coming out. I remembered so many more of my gay friends who twenty years ago—even ten years ago—had to be cautious at their jobs or silent in their extended families.

I was crying in gratitude that those days were gone forever.

Peggy Rosenthal is director of Poetry Retreats and writes widely on poetry as a spiritual resource. Her books include Praying through Poetry: Hope for Violent Times (Franciscan Media) and The Poets’ Jesus (Oxford). See Amazon for full list. She also teaches an online course, “Poetry as a Spiritual Practice,” through Image’s Glen Online program.

The image above is used under a Creative Commons license by Guillaume Paumier on Flickr.