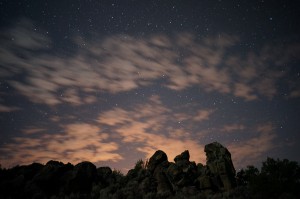 Not long ago, while walking on the Navajo reservation after sunset as the southwest horizon’s showy magenta yielded to purple and black, I spied the planet Venus, dressed as Hesperus, the evening star. Just below, closer to the now hidden sun, stood the fainter disk of Mercury.

I walked on, pondering the evening’s beauty, until gathering darkness revealed farther up the ecliptic—the plane along which the visible planets appear to course—the ruddy glint of Mars. Three planets, descending in line like ships sailing to harbor, heartbreakingly beautiful to conscious creatures, like me, who live so briefly. It was an unmerited gift, a moment of grace, a reminder to be grateful, attentive, and kind while there’s still time.

Even as night settled over the desert, I could still make out the jagged silhouette of Dook’o’oosłííd, the Navajo sacred mountain of the West—named the San Francisco Peaks by Europeans—its snowy crowns faintly visible in the dying light.

I’ve hiked the peaks and found them an island of ascending wonder, where meadows give way to pine and fir, then to aspen, and finally to treeless tundra near the summits. As a reader of geology, I also know the peaks as an immense, eroded stratovolcano, its inner fires quenched many centuries ago. One way of seeing them doesn’t negate the other. To walk in the chilly shade of an aspen grove on rock that once flowed underground as superheated magma invites contemplation, not debate.

I turned my gaze back to the planets, knowing that what appeared to me as tidy alignment masked a vast, complex geometry. Venus and Mercury are closer to the sun than earth, and seen only low in the sky at sunrise or sunset. Mars orbits half again as distant from the sun as Earth, and—to Earthly observers at least—not so closely tethered to the horizon.

The little I understood of astronomy did nothing to diminish the mystery before me, but enlarged and deepened it. It’s true, however, that my ability to know and name what I saw didn’t make me special nor what I saw more beautiful. The gift and mystery abide, independent of names and explanations. My Navajo friends tell me such visionary moments are hozhoni, from their nearly untranslatable word hozho, which rolls beauty, wholeness, harmony, and balance into one glorious immensity. A Navajo doesn’t summon or control hozho. One walks in it.

Beauty and her dark cousin, the sublime, invite us to walk mysterious borderlands outside the rigidly enforced binaries (knowledge versus belief, myth versus truth, subjective versus objective) preferred by theologically naïve champions of faith or the sciences’ loud proselytizers. Fundamentalism, a disease of malignant certainty, blinds young-earth creationists like Ken Ham as much as dismissive antitheists like Richard Dawkins.

It may have been easier to believe in such things as unmediated, certain knowledge sixty years ago, before philosophers of science abandoned hope that scientific language might be purged of all metaphor, interpretation, and assumption. Neil deGrasse Tyson’s glib assertion that “the good thing about science is that it’s true whether or not you believe in it” is true, but not to the degree he seems to believe.

Fruitless squabbles between self-appointed champions of the sciences and faith—two ways of apprehending the real—typically proceed without intellectual humility. (Note: I prefer “faith” and “the sciences” to the falsely monolithic proper nouns “Religion” and “Science.”) The books of nature and scriptural revelation tell us precious little in every sense of the phrase. What treasure we learn from them floats in frail ships on an ocean of unknowing, a mystery into which our paths to knowledge make tentative voyages, but few grand discoveries. Oceanic mystery dwarfs the fleet.

The sciences and faith speak different languages and shouldn’t be expected to say identical things in identical words. They’re musical lines in a polyphonic score where pungent dissonances enliven overarching harmony. In describing, in their own ways, the nature of things, they remind us how all we take for granted is, in fact, utterly contingent. Consider some examples:

The universe need not be beautiful.

Evolutionary theory has ways of explaining human attraction to beauty as conferring some biological advantage, or as a secondary effect of some other adaptation. Such explanations appear untestable, more like Rudyard Kipling’s “Just So Stories” than rigorous proofs, but that doesn’t mean they’re wrong. They imply, however, that things might have turned out otherwise. An evolutionary biologist can’t point to a forerunner of Homo sapiens and say, “Whatever evolves from this creature must, of necessity, hunger for beauty.”

Yet scientists often cite the beauty of a theory as reason to consider it seriously—an odd criterion if beauty truly lies in the genome of the beholder. Albert Einstein’s highest praise for a good theory or piece of work was not that it was correct or exact, but that it was beautiful.

Physicist Paul Dirac found great beauty in mathematics that displayed symmetry, economy of form, deep connections with other mathematics, and maximum structure from the simplest inputs. There’s no scientific reason things must be this way. That images from the Hubble telescope or the internal structure of crystals appeal to us aesthetically is, scientifically speaking, a happy accident, a stroke of cosmic good luck.

The person of faith who sees the universe as God’s creation out of nothing (ex nihilo) has the advantage of seeing beauty as objective, part of the nature of things rather than an internal, subjective response. Tradition holds that God isn’t capricious, but a sovereign God could have made things otherwise and still called creation “very good.” The beauty of the universe is, theologically speaking, gratuitous, a gift, and we are blessed to inhabit it.

What these two ways of seeing might suggest to the person of faith is the patience and self-emptying (kenosis) of the God who loves and sustains creation rather than micromanages it. God is a great artist who, trusting the materials, lets them find their internal logic rather than impose rigid order from the beginning.

Brian Volck is Assistant Professor of Pediatrics in the Division of Hospital Medicine at Cincinnati Children’s Hospital Medical Center. Brian received his undergraduate degree in English Literature from Washington University in St. Louis and his MFA in creative writing from Seattle Pacific University. His first collection of poetry, Flesh Becomes Word, was released in October, 2013. He is coauthor of Reclaiming the Body: Christians and the Faithful Use of Modern Medicine and contributed essays to Wendell Berry and Religion: Heaven’s Earthly Life, and The Spirit of Food: Thirty-four Writers on Feasting and Fasting toward God. His essays, poetry, and reviews have appeared America, The Christian Century, DoubleTake, and Image.