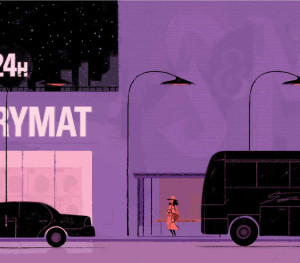 Catholic imagery appears throughout Lucia Berlin’s A Manual for Cleaning Women, the posthumous selected stories that has brought her singular fiction out of obscurity.

The magnificent “El Tim,” a story about a charismatic adolescent Mexican-American boy who disrupts a Catholic school with his sly behavior, begins: “A nun stood in each classroom door, black robes floating into the hall with the wind.” The grade school nuns keep perfect order, but the middle school ones have a harder time: “They could not use awe or love like the grade school nuns. Their recourse was impregnability, indifference to the students who were their duty and their life.”

In this story, Berlin contrasts the nuns’ garb and demeanor with that of the young men they teach. They may share a religion, but the boys display its symbols to different ends: “They wore open black shirts or V-neck sweaters with nothing under them, so that their crucifixes gleamed against their smooth brown chests…the crucifix of the pachuco, which was also tattooed on the back of their hand.”

In “Good and Bad,” set in Chile, where Berlin lived like a debutante during her teen years while her father worked a lucrative mining job, she again evokes the grace of nuns: “[The school] was run by French nuns, lovely old nuns, with fleur-de-lis coifs and blue-gray habits. They floated through the dark rooms, above the stone floors, flew down the passages by the flowered courtyard, popped open wooden shutters, calling out in birdlike voices.”

Berlin didn’t care for the way contemporary nuns dressed. The “Stars and Saints” narrator says: “I had of course decided to become a nun by then, because they never looked nervous but mostly because of the black habits and the white coifs, the headdresses like giant starched white fleur-de-lis. I’ll bet the Catholic Church lost out on a lot of would-be nuns when they started dressing like ordinary meter maids.”

Berlin loved the trappings of the Catholic Church, from the nuns’ crisp habits to gory depictions of Christ, especially in Mexican churches she saw when visiting her sister, who married a Mexican man and lived in Mexico City. In “Fool to Cry,” inspired by the weeks Berlin lived with her sister as she was dying of cancer, the narrator says of visiting a church in Coyoacán:

“I knelt at the back, near the bloodiest Christ, and watched the ceremony.” She recalls, “In Mexican villages, when my sons were infants, Indians would sometimes make the sign of the cross on their brows. Pobrecito! They would say. That such a lovely creature should have to suffer this life!”

In “Panteon de Dolores,” the narrator makes an ofrenda for her sister: “Offerings to the dead. You make them as pretty as you can. Cascading and brilliant with marigolds and magenta velvets, a flower that looks like brains, and tiny purple sempiternas. The main idea about death here is to make it beautiful and festive. Sultry bleeding Christs, the elegance, the ultimate beautiful deadliness of bullfights, elaborately carved tombs, headstones for the graves.”

Clearly the look and symbols of Catholicism appealed to Berlin. But more than that, the themes of her stories are the most deeply Catholic I have come across in writing by a non-Catholic. Time and again, Berlin creates dignified portraits of the downtrodden: alcoholics, the poor, the blind, the ill, people who hold jobs others disdain. Berlin would have rolled her eyes to hear me say it, but she ventured where Jesus would have gone and came back with beauty.

In “A Manual for Cleaning Women,” the narrator says, “Rich people in cars never look at people on the street, at all. Poor ones always do…in fact it sometimes seems they’re just driving around, looking at people on the street. I’ve done that. Poor people wait a lot. Welfare, unemployment lines, Laundromats, phone booths, emergency rooms, jails, etc.”

In “Angel’s Laundromat,” the narrator comes to an understanding with a Jicarilla Apache Indian man who is frequently at the Laundromat the same time she is: “One day I hadn’t seen him but I knew it was his fine hand on my shoulder. He gave me three dimes. I didn’t understand, almost said thanks, but then I saw that he was shaky–sick and couldn’t work the dryers. Sober, it’s hard. You have to turn the arrow with one hand, put the dime in with the other, push down the plunger, then turn the arrow back for the next dime.”

But perhaps my favorite example of the absolute empathy, humor, and grace that characterized Berlin as a person and a writer is in “Emergency Room Notebook, 1977.” In the story, a woman who works as an assistant in an emergency room has gotten to know a blind man whose wife died there. Later she spots him on the bus and sits beside him:

“He was very funny, describing his new, messy roommate at the Hill Top House for the Blind. I couldn’t imagine how he could know his roommate was messy, but then I could and told him my Marx Brothers idea of two blind roommates—shaving cream on the spaghetti, slipping on spilled stuffaroni, etc. We laughed and were silent, holding hands…from Pleasant Valley to Alcatraz Avenue. He cried, softly. My tears were for my own loneliness, my own blindness.”

The last time I saw Berlin, she was living in a trailer park in Boulder, struggling with poor health. “In terrible pain,” she wrote me in one of the last emails she sent me. “Can barely walk around. Making oatmeal a huge project.”

How ecstatic Berlin would be that her book is now a finalist for the $50,000 Kirkus Prize. It kills me that I can’t share the good news with her. I think this makes her an honorary Catholic: in life she experienced all of the suffering but almost none of the glory.

Jenny Shank is a novelist whose first novel, The Ringer, won the High Plains Book Award.