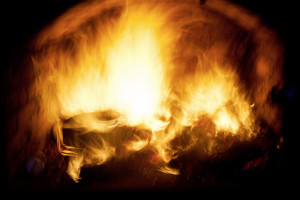 This poem is crafted as a conversation: among an unspecified “they,” an unspecified “we,” and God. The “we” is skeptical about the good actions traditionally attributed to God. (“From nothing God made everything, they said. / Nothing plus God is nothing we said.”) The “we” presumes humankind’s self-sufficiency: even though we are “honeyed self-interest,” “when something goes wrong, we fix it.” The poem is a profound metaphysical meditation on the nature of humankind in relation to God. I like how no easy answers are offered; rather, “we” and “they” play tug-of-war with their contrary notions of truth. And God has —if not the last word — the last action: creating “the tragic beauty of the world.”

“Ex Nihilo, Then Us” by Robert McNamara

From nothing God made everything, they said.
Nothing plus God is nothing we said. But with something to work with, look what we’ve done.
God said, you’d better and you’d better not, they said. And sometimes it looks like you have when you shouldn’t.
Eyewash, we said, it’s just how we are, honeyed self-interest in the milk of human kindness, and when something goes wrong, we fix it.
He is our formal and our final cause and rest. In him we shall not want.
We sang, oneself, in our wants each of us holy. And stood transfixed as desire crowned like wildfire leaping oceans. Some stood tall as a house, others drowning.
What the hell, we said. And so it came about that all things good and beautiful henceforth were called outrage on the bodies of the oppressed. And look, we said, at what we’re doing about it.
Talking, they said. And look at what God has done, meaning the tragic beauty of the world.