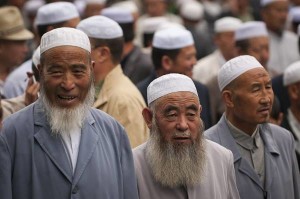 There’s a new law in China, and it’s aimed at weakening a faith. As the Chinese government is not one to bother with currying world opinion, those who speak for the authorities are quite aboveboard regarding exactly what they’re about and why:

It’s not uncommon for the jailed to fall in love with their jailers—Stockholm Syndrome, it’s called. But I venture that in most cases, it’s those who use the strongest tactics against their prisoners who win the most hearts. Lock them up and they stay strong; wear them down and win them over.

But back to the law: the new Chinese mandate requires all restaurants to serve alcohol, including those operated by Muslims.

Now, as most people know, Muslims are teetotalers. They don’t consume alcohol and prohibit its service as a tenet of their faith. But under this law, they have no choice—or rather, they do, but at quite a cost: You want to run your business? Fine, pour the drink. You won’t pour the drink? Fine, go out of business. It’s all up to you. See how free you are?

Eventually, goes the logic, the Muslim vendor will succumb. It’s too hard to surrender a livelihood and pick up something new; in these times, financial peril is all too real. So more likely than not, something will have to go. The Chinese government is betting on its being the faith, the suppression of which was always its real objective.

It’s thought that the establishment owner will start down the path reluctantly, but when his business picks up, he’ll soften to the idea. In time, he’ll see there’s no real problem with it and he’ll wonder what the big commotion was. At length, he’ll accept the orthodox opinion—the one shared by those in power—that the taboo is only a superstition. And he’ll find that there is both advantage and alliance in coming around to the majority position.

So now the question presents itself: Which is the worse offense against religious liberty? To forbid someone from practicing his faith or to force him into betraying it?

Is it worse to prevent the Amish girl from wearing her bonnet or to make her don a mini-skirt? Is it more deplorable to forbid the orthodox Jew from leaving work before Friday sundown or to require that he eat a barbeque sandwich on the way? Is it more devious to tell the nun she cannot employ workers in her soup kitchen or to force her to buy condoms for them if she does?

It would seem the latter is worse, as its method is to pervert the adherent into a tool, to orchestrate a sacrilege with the believer made into the instrument of profanation. This debasement is blunt, throated, total.

Oh, but some would say: What’s the big deal? Most everybody in the world wears modern dress, eats what they want, slaps down a ten spot for a box of cheap latex rubbers. Those are good things, the vast majority cries, and the government is behind it. We should all support the industries, fund education, provide healthcare—don’t be such a medieval trog.

Besides, we’ve tried to play nice, says the powers that be—to let you remain the strange little creatures that you are. And we would’ve continued to do so if you’d only stayed quaintly removed from us in your hobbit holes. But if you insist on entering the public square—opening a restaurant, running a nursing home, etc.—you’ll have to check some things at the door.

Of course, you’re “free,” mind you. You have a choice. Do what we say, on our terms (we’ll even supply a covering “argument” for your scruples), and you can stay out here in the world with the rest of us. True, you’ll have accepted our perspective on the parameters of your beliefs, but that’s just the price of the community forum.

Besides, we have judges—robed men and women who pronounce from on high—who will assuage your conscience—who will tell you that no matter how sincerely you believe that you’re betraying your faith, you really aren’t, not one little bit. So don’t listen to the arbiters of your creed; what do they know about it?

And if we go around giving exceptions to people, just letting them profess any old thing, then imagine all the poseurs and charlatans that will evade our laws. How can we calibrate sincerity? That thousand-year-old dogma might be just a ruse; those ancient vows that have you giving up money, sex, your own will—all that might be just a scam to keep you from ponying up.

But if you insist—if you simply must stick to your view of things—then you’re free to go into another business, or out of business altogether. So choose. It’s a Hobson’s Choice, granted, but there you have it.

Hobson, for the unacquainted, was a famous London stable owner. Anyone could rent a horse from him, but you had to take whichever one was closest to the door—that one, or nothing. If it was a nag, if it was blind, if it was repulsive to all you held dear—you were free to refuse him. But then you’d have to walk. Good luck getting where you’re going. But hey now, nobody was forcing you.

So go ahead, say our modern-day Hobsons, their liveries exchanged for gowns, their stables for legislatures. Go ahead and take what’s offered; take it and you’ll see. It’s not so bad. It’s pretty damn good, in fact. Hell, it’s suited the rest of us just fine, and for the longest of times.