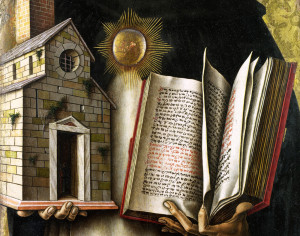 The following is adapted from the preface to The Operation of Grace: Further Essays on Art, Faith, and Mystery.

My God, my God, thou art a direct God, may I not say a literal God, a God that wouldst be understood literally and according to the plain sense of all that thou sayest? but thou art also…a figurative, a metaphorical God too; a God in whose words there is such a height of figures, such voyages, such peregrinations to fetch remote and precious metaphors, such extensions, such spreadings, such curtains of allegories, such third heavens of hyperboles, so harmonious elocutions, so retired and so reserved expressions, so commanding persuasions, so persuading commandments, such sinews even in thy milk, and such things in thy words, as all profane authors seem of the seed of the serpent that creeps, thou art the Dove that flies.—John Donne, Devotions upon Emergent Occasions

The essays gathered in The Operation of Grace: Further Essays on Art, Faith, and Mystery were originally published as editorial statements, each beginning an issue of Image. They seek to explore the trinity of terms we’ve set forth in the journal’s subtitle, “art, faith, mystery.” Whether these words strike you as intriguing or pretentious may depend on your personal tastes, but anyone proposing them for consideration ought to have an explanation or two handy for the curious.

In the early days of Image the subtitle was the more prosaic “A Journal of the Arts and Religion.” It was serviceable enough, but for a literary quarterly featuring original creative work rather than scholarship, it gave the wrong impression. It also lacked something in the way of connotative richness, and since art works its magic through that sort of suggestiveness, we felt the need to make a change. Then we noticed some publications using individual words, staccato-fashion, as subtitles to suggest a whole realm of interrelated interests, and we pondered what words might work for Image.

“Art” was a given, and once again it needed to come first. For all its power—and no doubt because of its power—art through the centuries has often been harnessed to powerful interests, religious as well as political. The cornerstone of Image’s vision has been the conviction that art can explore religious experience in ways that are neither didactic nor moralistic. To paraphrase Walker Percy, we believe that art is cognitive—that it is a way of knowing. Art is not beholden to some other language or discipline for its capacity to discover and convey meaning.

We chose “faith” instead of “religion” because it felt like a more active and immersive word—more existential, less like a philosophical category. However dogged by doubt one’s faith may be, it is ultimately a verb as much as a noun—an ongoing (if fraught and daunting) act rather than something static and settled. And to the extent that faith sounds like a verb, it reverberates, so to speak, with the word art, reminding us of the importance of art as making, an ongoing creative act.

As you might imagine, the third term proved the trickiest. The first two words establish lines of convergence. What might their common end-point be? It didn’t take us long to set aside “spirituality,” a term so watered down and anodyne as to have become meaningless, and one that denied art’s cognitive power and threatened to strap it back into the harness again, reducing art to therapy.

We settled on “mystery,” though we’re aware that to some ears it might sound like little more than mystification. But in the past half-century Flannery O’Connor and a number of modern philosophers and theologians have rescued the concept.

What appealed to us was that mystery simultaneously conveys an adumbration of transcendence—Rudolph Otto’s mysterium tremendum—and a form of knowing. The Greek mysterion derives from a word meaning “to shut” or “to close,” but in most of the ancient religions one could undergo a series of rituals and practices that would, in time, nudge the door open just enough to allow in a little light.

Thus mystery lies in the borderland between the knowable and the unknowable. It would be easy (and lazy) to simply say that mystery is suprarational and leave it at that. But that does a disservice to reason, our inbuilt desire for the world to make sense. Mystery thus lies at the intersection where reason, intuition, and imagination meet, where only the both/and language of paradox seems capable of uniting everything that otherwise seems hopelessly either/or. We are body and soul, bound and free, fallen and godlike.

In Real Presences the critic George Steiner likened this place of mystery to Holy Saturday, another emblem of in-betweenness, after the crucifixion but before the resurrection:

Between suffering, aloneness, unutterable waste on the one hand and the dream of liberation, of rebirth on the other. In the face of the torture of a child, of the death of love which is Friday, even the greatest art and poetry are almost helpless. In the Utopia of the Sunday, the aesthetic will, presumably, no longer have logic or necessity. The apprehensions and figurations in the play of metaphysical imagining, in the poem and the music, which tell of pain and of hope, of the flesh which is said to taste of ash and of the spirit which is said to have the savor of fire, are always Sabbatarian. They have risen out of an immensity of waiting which is that of man.

Gregory Wolfe is the founder of Image and serves as Writer in Residence and Director of the MFA in Creative Writing program at Seattle Pacific University. His books include The Operation of Grace: Further Essays on Art, Faith, and Mystery, Beauty Will Save the World, and Intruding Upon the Timeless. Follow him on Twitter: @Gregory_Wolfe.