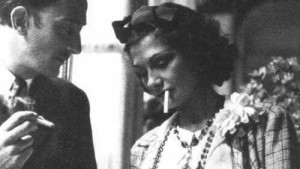 When my husband and I were in the very early stages of our relationship, we both hid from each other that we used tobacco. He chewed. I smoked. But we’d been set up because both of our families were churchy. He thought I was a pious Catholic girl who might be turned off by his tobacco use. And I thought similarly of him.

It wasn’t until our fifth date or so that we’d both had a couple glasses of wine and we couldn’t stand it anymore. I bummed a cigarette off the waiter, and we split it. I remember him inhaling twice before he exhaled, and I thought, for some reason, that it was one of the most sexy things I’d ever seen—the depth of his lungs, the voracious authenticity of his need. We spent the rest of our courtship in tobacco heaven, until we married and had our first kid, and we both put our habits to rest.

I’m still drawn to smokers and thirsty people of any stripe. An old friend used to say that “smokers are always looking for something,” and so they form an instant community as they gather on the sidewalk in exile eight feet from every door.

When I was younger and everyone was beautiful and smoking, it was easier to believe we were all on the search, and that by some mystery, we’d all be deeply heart-satisfied someday soon, maybe by marriage, career or family, or by doing something amazing.

But the romanticism of that notion struck me recently, when I had occasion to visit the city hospital. The entire campus of the hospital is non-smoking, and there are signs everywhere that say, “Don’t even think about smoking here!” If that’s not a siren song, I don’t know what is. Under every sign, someone was lighting up; the toothless man with the oxygen tank attached to his wheelchair, the woman with lesions on her exposed arms and cleavage, the man with the yellow mustache—all brazenly ignoring the bossy sign.

There was in their rebellion some nature of fallen kinship, no doubt, which got me thinking about addiction, my addiction to coffee and whatnot, and that feeling of waking up thick-blooded and knotty, and all it takes to loosen up everything inside is a few sips of the hot and bitter. I have a want. I am satisfied. And such instant results are within my control.

That kinship is not a brotherhood of need, or thirst, but rather of terminal satiation— kinship founded on a shared method of evading the thirst. I could be wrong, but I don’t think the guy smoking with an oxygen tank is still really looking for something.

My husband and I have struggled over our sixteen years of marriage, as one by one, each of our own shared methods of evasion slough off. And beyond smoking, we’ve shared many methods: exercise, entertainment, alcohol, even prayer and pious devotions directed at each other in attempts to leverage the power of God towards our own will for the other’s behavior.

Each shedding reveals a jagged edge, a painful new revelation of that initial search for fulfillment in our own hearts. It is a discipline, to experience that longing, that thirst, knowing our old ways of sating it are still at hand if we want them, but to say, “No, darnit. I am going to feel this.”

And I see that the thirst is good. I honor the thirst, because although allowing it to persist can feel like chaos or a degeneration of our known and familiar way of being, when I let it stand as a sign of my hope for heaven—in rarified circumstances over which I have no control— I experience in it the visitation of my God.

I am always baffled by the fickleness of Christ’s revelation of himself to me—sometimes in blatant letters: I AM (and this, most often when I read the Word). But mostly in the dissipation of the vision, and the subsequent longing for it. It’s a glimpse that quickly dissolves, not only in the Eucharist on my tongue, but in the priests and people who represent Christ to me. They flare, they fade, and the thirst goes on.

I tend to think of sobriety and other forms of abstinence as a way of protecting the thirst, maintaining the sharp edge that cries out for relief. It’s the same thirst that caused the Samaritan woman to go to the well for water, where she finds Jesus waiting for her, to share the troublesome message that the thirst is mutual: both man’s desire for a wellspring that never runs dry, and God’s desire to supply it.

Thirst is a condition of our humanity. On the cross, Jesus said, “I thirst,” which was one of the final expressions of his human experience. He had fulfilled everything the Father had asked him to do, and was given only a rag soaked in vinegar for satisfaction. His own physical thirst went unquenched into the next life, as he yielded up his spirit, parched and bleeding.

There is, in the death of Christ, an acknowledgment that fallen creation has mastered evasion, that God will ever thirst for man, and man will run from him, deny him, and satisfy his own flesh by crucifying God’s flesh wherever it is exposed.

It’s what happens afterwards, which gives me hope—when the soldiers puncture his side and blood and water pour out. The water is a promise that God’s thirst for us never surrenders, that when I’m choking on my lack of options, sputtering along on diminishing visions and plans, and searching for some utterly new way of being alive, there is more hidden life for me in the body of Christ.