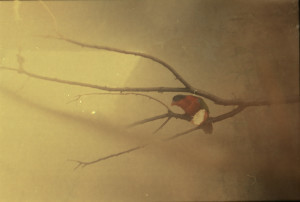 Multiple members of my family live with chronic pain, which is why I’m always arrested by writers who don’t let God off the hook for painful experiences, who question suffering more closely. Can we know who is ultimately responsible for suffering? Does suffering have a purpose (and if it does, why does it so often feel senseless)? Most importantly, how do we move through pain and cause less of it ourselves? The narrator of this poem shows pain reducing us to our most animal selves—like “a dog who’s been beaten”—and yet we, unlike animals, are able to ask our owners: “Why do you beat me?” On one level, that question sits on the page like an unanswered cry to the heavens, recalling Job. On another level, we’re encouraged to aim this question at ourselves in the mirror—because it seems possible that if we are divinely inspired, we are capable of our own forms of “divine wrath.” What I love about this poem is that, in the end, the act of questioning helps us transcend the need for answers. The perpetrator and victim dissolve into each other in one shocking prayer: “May whoever hurt me, forgive me.”

When I was wounded
whether by God, the devil, or myself
—I don’t know yet which—
it was seeing the sparrows again
and clumps of clover, after three days,
that told me I hadn’t died.
When I was young,
all it took were those sparrows,
those lush little leaves,
for me to sing praises,
dedicate operas to the Lord.
But a dog who’s been beaten
is slow to go back to barking
and making a fuss over his owner
—an animal, not a person
like me who can ask:
Why do you beat me?
Which is why, despite the sparrows and the clover,
a subtle shadow still hovers over my spirit.
May whoever hurt me, forgive me.

Translated from the Brazilian Portuguese by Ellen Doré Watson

Adélia Prado is one of the foremost poets of Brazil, praised both in literary circles and the mainstream media. The author of six books of poetry and six of prose, Prado was praised by Veja (Brazil’s Newsweek) as “a writer of rare brilliance and invincible simplicity.” The Alphabet in the Park: Selected Poems of Adélia Prado, translated by Ellen Doré Watson, was published by Wesleyan in 1990.