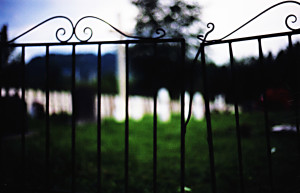 St. Therese once wished aloud that her own mother would die. When her mother scolded her, Therese explained that then she could sooner go to heaven.

My children received this anecdote with perverse joy, telling their siblings to jump off a bridge, run out in the street, and let go of the tree branch…that you may sooner see paradise, of course.

They’ve already noticed the problem that villains are usually the most interesting character in any novel or movie. It’s far more troubling to envision characters who are not completely wicked, characters who struggle with temptation but don’t succumb.

I tend to love my heroes too much to attribute them with serious flaws. Or I imagine there is a class of unsullied souls, anointed souls who somehow, magically, don’t sin. They may have sinned in the past, but no more. They meet Jesus, they fall off their horse, or maybe they’re just born with an incredible endowment of piety, and sin can’t touch them. A heaven full of such insufferable people really doesn’t sound appealing.

Sainthood, for someone like me, then, does not seem to be an option, which is not to say that I don’t want to appear to be a saint. I spend plenty of time in imitation of saints, while simultaneously not really wanting to be one.

There is always some part of me holding back—parts of my relationships, my music, what I consider to be “my art.” It seems that submitting them to God would create limitations; that I would be subject to a new and unforeseen set of boundaries that would stifle me.

I often remain a person divided inside myself—longing for God on one hand, hoarding my liberty on the other, even if I never exercise that liberty, even if I just keep it back in case one day I need it.

Nothing is more ineffective than a person divided within. She cannot stand. She cannot move with the full effect of her will. She wants, but does not want. She makes effort to move, but does not move. She seeks alternatives to her true desires. As C.S. Lewis noted in The Screwtape Letters, she does neither what she ought, nor what she likes.

No one has a calling to become someone else. I admire St. Therese in all things, but becoming her is a dead-end road for me.

Several years ago, my husband burned his legs badly when gasoline fumes caught fire near his workshop. Doctors in the ER debrided the wounds, and sent him home with instructions for me to wash them thoroughly every day. A nurse showed me how to scrub the wounds, but I couldn’t do it. I was afraid of hurting him, even though his nerves were so injured he couldn’t feel anything.

Within twenty-four hours, his burns were bright fiery patches, inflamed with infection, and my husband had to go back to the hospital for antibiotics and professional wound cleaning.

After Easter, when the Risen Christ meets Doubting Thomas, I always remember my lame attempt at weeding through my husband’s open tissue. Saint Thomas had no fear of touching Christ’s wounds, and Christ had no fear of being examined—Thomas’s hands penetrating each layer of skin; his pride and doubt giving way to humility and hope. It was indeed a body, inside and out, died and risen.

The deepest wound, the most disorienting secret of my inner life, the thing I skirt all around in the Confessional, too scared to say aloud; if I never examine it, it will never heal. My doubt, my pride, all that I withhold—my sins are intrinsically connected to Christ’s wounds, which are mercy.

I want to believe that the saints are not people who mysteriously evaded all temptation, but rather, people who have confronted and are not afraid of their own sinfulness. They are people who have examined the festering darkness in their own souls, and have allowed the pure blood of Christ to replace their own.

A heaven filled with such souls would be a happy place, I think, a place where I wouldn’t have to wear the mask of another soul, another saint who never knew the particulars of my life. It would be a place where I’m no longer stymied by the desire for opposing things, no longer a divided person—but one, whole, united within, by God, and permitted in wholeness to pursue many things.

Image above is by Kris Krüg, licensed by Creative Commons.