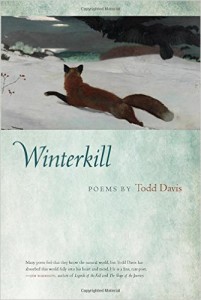 “There is another world, but it is in this one.” —William Butler Yeats

Reading Yeats’s line, I think vaguely incarnational thoughts: heaven enters earth with Christ’s Incarnation; God dwells within our world, not separated from it; and so on. I believe these statements. Yet these formulations give me nothing to grasp onto, nothing to engage my imagination.

How astonishingly rich, though, the other world “in this one” becomes in Todd Davis’s latest collection of poems, Winterkill, which takes Yeats’s line as its epigraph. For Davis, “this world” is the world of nature—particularly the mountainous woods, streams, and wildlife around his longtime central Pennsylvania home.

From what I’ve just said, you might think: oh, so his poems are about nature. But, no: something much more enlivening is going on in Davis’s poetry. He doesn’t write about nature; rather, he writes from deep within nature. The natural world is his ambiance: he so immerses himself in it that he breathes it, he prays it, he caresses each minute detail of it with his eyes and hands, his heart, his soul, his language. From within nature, life’s meanings speak to him.

Take fish and the water they live in. Davis spends a lot of time in these poems fishing. And sometimes it seems as if he catches fish specifically in order to handle them with delicate awe: to trace their wonders with his fingers and words.

The doors of the brook trout’s pink gills open
and close as it wriggles in my palm, back
yellow and black, variegated like coral….
In hand, the caudal fin
flays orange and ebony, a nimbus of flame

haloing the body….
I spread the net of my fingers in the water,
and the trout disappears beneath a ledge, as the stream
will, if I follow it high up into the mountain.

Here, in “Aesthetics Precedes Ethics,” as in many of the poems, Davis’s immersion in nature shows him its “disappearing” from him. He caresses its details not to possess them but to learn how such a possession is forever impossible.

So another fishing poem, “”Canticle for Native Brook Trout,” ends:

as we release them
and they swim
from our grasp
back into a sliver
of sunlight.

The volume’s longest poem, “Salvelinus fontinalis,” is an homage to brook trout (their scientific name).  I find the essence of Todd Davis’s vision and spirit in this major poem. Nature is alive: “The water’s footsteps descend the stairs / of the mountain.” Nature even grants us humans pardon for defiling it by mining: “Springs rise everywhere in this stream, / struggling to forgive us…. Davis “hungers” for “a connection / with that life hidden / in rock-seams.”

That hidden life: it belongs to the water, the trees, and of course the fish.

We all worship something.
I’ll take the beauty and strength
of these fish, holy and godlike,
with backs vermiculated
so you can’t see them as they fan
above strewn rocks at your feet.

“Holy and godlike”: explicitly religious language like this enters only occasionally into the poems of Winterkill. In previous collections, Davis wrote poems that drew often on the language of the Gospels, finding in the natural world the wisdom of Scripture. He’s not sure he needs Christian doctrine and practice, now that he has the fish:

I’ve caught myself praying to them,
hoping such prayers might help them
save themselves, and because I can’t
escape the religion of my youth,
I still believe God is one, or at least three-
in-one, the world drenched by the Holy
Spirit of this fish’s colors.

Consider each cell trembling
in my hand as I hold
this fish that gives me faith.

Another core theme of Winterkill also enters this poem: the inevitable loss and death that are the lot of all living things. Here in “Salvelinus fontinalis,” it’s the beginning of loss of his eyesight: “At fifty my eyes have begun to fail.” Elsewhere in the book, many poems reflect on his father’s recent death and on the deaths everywhere around him in the natural world: some quiet, some brutal, some intentional (as when he is hunting), some shocking.

The poem “Wood Tick” seems to contain them all. Two red-tailed hawks “hunted the back yard” for rabbits, mice, a neighbor’s cat. “The bones of a ten-year-old girl who’d gone missing were found // riddled with the teeth mark of coyotes.” “A circle of feathers” belong to a bird snatched by a bobcat; “a white line of scat / showed the bird’s surprise.” And finally, that wood tick: Davis sometimes finds it “along my hairline, belly distended, // bloated on the blood none of us wish to spare.” The tick is removed by a friend who burns it with an ember of tobacco “as I watched / the tick’s head blaze, buried dead beneath the flesh.”

Along with this friend, other people enter these poems; I don’t want to leave the impression that Davis’s absorption in nature distances him from fellow humans. Far from it. His wife, sons, and neighbors play their parts. But their parts, as would be expected, are played out within the natural world surrounding their home.

There’s the pastoral image of Davis and his wife working so hard on their land that they fall asleep “beneath the falling petals of a serviceberry tree” (“April Landscape, with Petals/Furrows/Wife”). There’s the delightfully moving image of a friend’s son who’s so intimately connected to birds’ songs that he can hear and identify them when “all we heard was the sound / of the stream below” (“Ornithological”). Most startling, there’s the transformative image in “Transfiguration of the Beekeeper’s Daughter,” where the bees swarm so closely around the girl’s body and into her hair and ears that

a girl vanishes
and in her place a winged seraph flies.

What an astounding image of the truth which Yeats utters and which the poems of Winterkill embody: “There is another world, but it is in this one.”