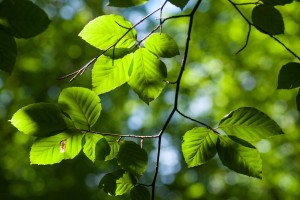 I can’t begin to count the number of poems which offer their language to re-imagining the Genesis creation story—maybe because poetry itself is an act of creation.  Jeanne Murray Walker’s creation narrative “In the Beginning Was the Word” (Image issue 85) plays exuberantly with language, as if in imitation of God’s exuberance in creating our world. Walker imagines a teasingly “tough” neighborhood that our planet settles into: all the elements enlivened by cosmic (and comic) emotions— “irate Mars,” “the kerfluff / of a moody moon.” Then Walker shifts her creative gaze to earth itself, as life sprouts in a wild disorder. Finally, human language itself “bursts” forth as “Creation thinking about itself”; and, yes, the creative force of our words is likened to God’s. One dark note clouds the poem’s closing line: all these words have the potential to be “dangerous.”

“In the Beginning Was the Word” by Jeanne Murray Walker

It was your hunch, this world. On the heyday
of creation, you called, Okay, go! and a ball
of white hot gasses spun its lonely way
for a million years, all spill and dangerous fall
until it settled into orbit. And a tough
neighborhood, it was, too. Irate Mars,
and sexually explicit Venus, the kerfluff
of a moody moon, and self-important stars.

And trees. Think of their endless rummaging
for light, their reckless greening, how flowering
is barely regulated damage. Then birds,
mice, sheep. Soon people, bursting into language.
Creation thinking about itself: our words soaring
like yours through time, dangerous, ordinary words.

Image above is by Miles Wolstenholme, licensed by Creative Commons.