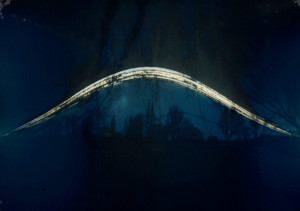 I’m a poet and believer. If anyone should spend an evening gazing at a meteor shower, it should be me: dreamer, connector. Hidden under the fingernails of God. But those Zone 5A clouds seem ever near in August, when the air thickens with cicada song. And to be honest, I’m relieved. The day’s tasks of laundry and writing and breaking up children’s fights is enough to make me collapse in bed or at least loll in front of the flickering lights of Netflix for an hour or so. Knowing it’s too cloudy or late to see the Perseids (must be on time to church!) earns me the right to be lazy of awe. But Richard Jones’s poem, “Manifestation,” wakes me up. The speaker insists on abiding with  “glory beyond measure,” even in the late hour and thick fog. Even at the point of despair. But it’s the last three lines I read over and over, the reminder of the mundane wonder that burns every night, at least until it’s extinguished.

“The Manifestation” by Richard Jones

The night of the Perseid shower,
thick fog descended
but I would not be denied.
I had put the children to bed,
knelt with them,
and later
in the quiet kitchen
as tall red candles
burned on the table between us,
I’d listened to my wife’s sweet imprecations,
her entreaties to see a physician.
But at the peak hour—
after she had gone to bed,
and neighboring houses
stood solemn and dark—
I felt no human obligation
and went without hope into the yard.
In the white mist
beneath the soaked and dripping trees,
I lifted my eyes
into a blind nothingness of sky
and shivered in a white robe.
I couldn’t see the outline
of the neighbor’s willows,
much less the host of streaking meteorites
no bigger than grains of sand
blazing across the sky.
I questioned the mind, my troubled thinking,
and chided myself to go in,
but looking up,
I thought of the earth
on which I stood,
my own
scanty plot of ground,
and as the lights passed unseen
I imagined glory beyond all measure.
Then I turned to the lights in the windows—
the children’s nightlights,
and my wife’s reading lamp, still burning.

Image above is by Brandon Atkinson, licensed by Creative Commons.

Richard Jones is the author of seven books of poems, including Apropos of Nothing, The Blessing, and The Correct Spelling & Exact Meaning, all from Copper Canyon Press. Editor of the literary journal Poetry East, he is a professor of English at DePaul University in Chicago.