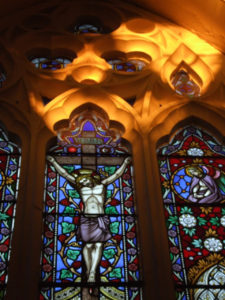 We’ve beat records for rain this year in central Minnesota. The sidewalks are pillowed with lilacs, and Saint Paul’s hundred-year-old storm sewers bring up syringes and squirrel tails and fish dropped by eagles over the Mississippi’s shore. The rain stains the sides of old high-rises; I love to walk in it and look at the patterns it makes, the grey sky that affirms the crumbling capital city’s true Goth self.

When the lightning peeks over the limestone cliffs that cup downtown, I calculate resistance to its strike: 100,000 ohms of denial mounted by the human body, less in bone, more in fat and muscle, but almost none when skin is wet. Water creates a parallel surface, an attractive conductor to lightning, but we work with what we’re given, our oscillations of resistance and susceptibility, and I walk faster.

I’ve been going to church lately. I hate church. I hate the pretend understanding of what is incomprehensible and ridiculous, I hate never knowing the proper procedure for any ritual, I hate that women are often treated as fractions of whole people, and I hate that I always drool my Communion wine.

I am judgmental and contemptuous in the absence of experience, a trait that keeps me frozen and perpetually terrified.

But I love the idea of God and of churches, and the churches in Saint Paul are largely old and enormous and deliciously sinister—stone, leaded glass, bell tower, gargoyle, armed angels. I’ve been trying to think of what it means to walk past them over and over, to look to them as a confirmation of dark and sad beauty in the cold, as source of rampant wild strawberries and the smell of incense mixed with hot dogs in the summer.

I’m easily seduced by habit, by a cultivated homesickness for landmarks. I’m attracted by and search out the promiscuous presence of God. I walk in order to fall in love, and I force myself into love because how else do you live in a city?

The church that I keep finding myself at has no connection to the Lutheran church in which I was raised. It’s Episcopal, and it’s foreign to me: the kneeling, bowing, processions, psalmodies. What on earth is a chancel? An undercroft? Can’t everything we need just be in one book?

I started going to sung Compline and was intrigued by it (sad, old, Latinate, gothic—I’m consistent) and began going to church. There are many doors, and I can often sneak out, invisible or ignored. I like the patterns in the carved wood, the pink wings on the glass angels; the building’s beauty is overwhelming and uncomfortable and often repellent.

In some way, I’m attracted by my own resistance to church—by the idea that there is something of God in resistance. When I fight God, I’m a teenager scared and scream-praying in my bed all over again, and I crave that informality, that closeness.

A few months ago, I learned the term “resistome,” an allusion to the fact that we carry many biomes within us, to the point where humans may best be defined as prettily organized collections of microbes.

The microbiome comprises the bacteria that live in our gut—Roseburia, Alistipes; under the microscope, they all look like Mike & Ikes, but we wouldn’t exist without them. The resistome includes the bacterial sub-populations that have conspired toward infection with our immune system and our irresponsibility.

Resistance has a hint of charm, even in the microbiological world, even when you’re doing everything you can to fight it. I think we can’t help being entranced, though what choice do we have when we’re containers for millions of ecologies and motivations?

Hate is exhausting; it stems from itself and turns back on itself. Resistance is interesting; we respect a good fight, the struggle to live, and, in a way, we like knowing we’re watched and understood to a degree.

Strains of E coli will protect each other when one is exposed to an antibiotic; Enterobacter cloacae will provide safe harbor to a drug-resistant sub-population. We like knowing we’re not alone, if it means we’re never truly ourselves.

If there’s a mortal sin with my name on it, it’s acedia (apathy, indifference, frozen-in-placedness), which Thomas Aquinas graciously called mortal only “when reason consents to man’s flight,” though I hold with John Donne’s captiv’d, weak, and untrue reason, also wishing to be heart-battered, enthralled, and ravished. No one knew the role of resistance in pulling God closer like Donne, and now do you see what the descendants of the Church of England have done to me?

At services for Pentecost, I knelt on the wood floor for prayer; I have a relapsing back sprain that appreciates the hard surface. The doctor told me to watch how I move, not to give in to the looseness in my joints. Without a brace, the bones drift apart. “It looks like grace, but it just causes more separation,” he said. “Try to push back, and everything will come back together.”

The baby being baptized that morning screamed the way anyone would being lowered into water against their will. Good for you, baby. Keep screaming a little against the church until you realize one day you’ve screamed yourself into love with it.

Image produced above is by Kristian Dela Cour, licensed by Creative Commons.