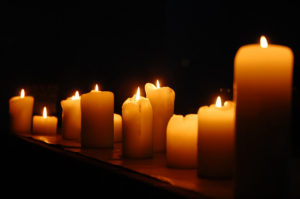 I remember my social security number.

I remember the combination to a lock—13 right, 27 left, 5 right—that rusted beyond use some years ago. How many years? I don’t remember. But I remember this: it was two locks ago.

I remember Shabbat dinner at the Jerusalem home of Edna and her husband and their son, who was home for the weekend during his mandatory period of service in the Israeli Defense Forces.

I remember the day when Edna and I, after having not seen each other for decades, met each other again.

About ten years ago, I arrived for my third summer as writer-in-residence at the Brandeis Bardin Institute in Simi Valley, California. That year, I taught only for the second of two four-week sessions in a program in which Jews, ages eighteen to twenty-six, from around the world explored Jewish identity through, in part, the arts. I was joining a visual artist, a dancer, an actor, and a musician who also served as the program’s arts director.

When I arrived at the Institute, a meeting of the arts faculty was already underway. Because of a conflict, the particulars of which I don’t recall, between the dancer and the actor, the room was tense. An abundance of talent, strong personalities, and stubbornness around that table. My arrival gave them an opportunity to pause their argument. Of the four continuing faculty members, there was only one I didn’t know, the visual artist. She told me her name, I told her mine, and the meeting resumed.

After the meeting, the director of the arts program, my dear friend and mentor, approached me with a broad smile.

Do you remember her, the visual artist, he asked?

You two were lovers in Jerusalem!

I was taken aback. I thought for a moment. Late summer, 1979? There was a woman. She imported colorful T-shirts and sold them around the holy city. The vegetable bin in her refrigerator was stuffed with fresh greens. These details I remembered. But I didn’t remember her face or name.

What sticks, what doesn’t stick?

Judaism (maybe other religions, too) is based on this: we forget. We will forget. Why else the first utterance:

Remember me? I am Y-H-V-H your God. I’m the One who brought you out of Mitzrayim (Egypt), out of the house of bondage.

If you didn’t notice that the first commandment is as much a reminder as it is a declaration, then the fourth commandment is there to state the theme explicitly: Zakhor, remember, it begins.

I’m doing phrase practice this morning. My intention is to direct, rest, and sustain my attention on a phrase: There is nothing but God, eyn od milvado, repeating it internally again and again.

Suddenly, I discover that I’m planning an event, a writers’ festival, I’m thinking about contracts that need to be finalized, funding that still needs to be secured. When I realize that my attention has wandered, I remember my intention. Without memory, I’d remain lost.

Some day, I’ll try to count. That would be a good practice.

Forgetting: It’s inevitable. It’s biological. Is it also a betrayal? A falling from the spiritual path?

Yahrzeit candle: a memorial candle. We remember to light it on the anniversary of a death. A twenty-four-hour candle, it reminds us, throughout the day, to remember the dead. Does it remember, as it burns, the dead, too? It burns down, it burns out, like, finally, memory itself.

If we know they will be broken, why do we make them? Because we’ve lost too much already, and we can’t bear losing any more? Because we are afraid that as we forget, we will be forgotten?

My fingers rest on a keyboard. They remember Qwerty. They type.

Image above by Anna Fruen, used under a Creative Commons license.