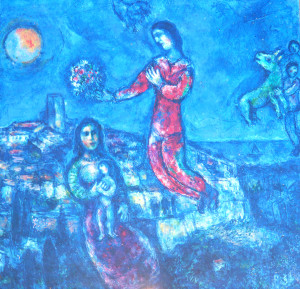 This is a poem to stretch the mind. It begins by stretching our imagination to a cosmic event: a “moondog,” which is a rare bright spot in the moon’s halo. It’s formed by a “mirage of light & cloud & ice”—an image which then brings the speaker down to earth, into his own life. But this life, as he sees it, is stretched among mind-bending options: for instance, he’s “not wiling to lose / that which I cannot keep/ for that which I cannot lose.” Then comes what for me is the poem’s core image: “Crumb by crumb the self is whittled down.” It’s the self of the Christian classic The Cloud of Unknowing, the self that must dissolve into “a leash of longing” for God’s very being. The “leash” then leads the poet into a metaphor of himself as “stray dog,” from which more mind-bending apparent opposites follow. All are playing with the self’s “dissolutions,” until the poem’s final line: the diminishment into a mere parenthesis filled with absences.

Gauzed shine on the infinite,
the moondog blooms like a distant searchlight
left of the moon, almost unmoving to the naked eye,

as if tracking a slow-drifting object,
like one of the balloons wafting
into North Korea, balloons with winter socks tied to them,
or one of Chagall’s ethereal blue bodies above a nameless Russian town.

Some mirage of light & cloud & ice,
Jupiter-toed & Aries-tailed,
it’s only a matter of hours between the length of its life
& mine, right now a confluence
of memory & cold & kerosene spill of lamplight on the deck.

Crumb by crumb the self is whittled down,
until you realize
your life might not be your own:
the noughting of oneself, the Cloud of Unknowing
calls it, & the all-ing of God,
who kindled our desire
& fashioned it into a leash of longing.

Stray dog, I’m afraid I’ll feel the leash slacken.
Although I hope I’m more than what I’ve forgotten,
& pray
I’m more than I remember,
my hope in the end, & after the end, stray dog—
for whom the resurrection is the full moon rising—

is resurrection, though the means are a mystery,
the time beyond me—
& so where the ladders end might be less important than where they start.
And so I edge toward the unknowing,
& away from the fear that has me afraid to give too much away,
afraid I’ll be too afraid
to give it all away. Our dissolutions seem a courtesy
of the animal grace we share: because of this end,

we have little to offer besides ourselves, besides praise
& nothing to keep: because of this lack we seek,
our willingness to let go of the world. Even the saints’ relics,
finger bone or blood-mark,
diminish, in the same way you diminish
then dissolve into a million cubist faces
in the frost on our windows,
as you dissolve on whitecaps & sleeping horses
(not even hunger is mine, not even fear or light).

Mark Wagenaar is the author of Voodoo Inverso (Wisconsin), 2012 winner of the Felix Pollak Prize. He is 2013 winner of both the James Wright and Yellowwood Poetry Prizes. His poems are forthcoming or have recently appeared in Tin House, Beloit Poetry Journal, Blackbird, Triquarterly, and Sugar House Review. He is a doctoral fellow at the University of North Texas and can be reached on Twitter at MarkGWagenaar.

Photo of Chagall painting by Dennis Jarvis, used with a license from Creative Commons