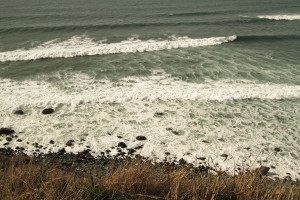 To behold God’s creation and to praise it with language is this poem—and it is also the poem’s subject. For what is God’s creation to the devoted poet but a reminder that, as a piece of that creation, she herself is an instrument of God in service of love? To sense creation’s magnificence, to point others to it, to love it by being dedicated to making art that praises it—and to do so with humility. It is, as Cording so tenderly points out, all in that “Again,” where we return to what we are not, in order to love all that is other than ourselves.

(from Hopkins’s journal of a vacation
on the Isle of Man, August 1872)

So much need in that “Again.” To see it
in good weather. To look down again
from the cliffs at the high water of a full tide.
To hold the kaleidoscope of the waves
to his eye and watch them churn and tumble
and change. To behold. To praise. To see
God’s work but also to answer the hunger
in him for words that can say what it is
he feels when he looks over the cliffs at the sea’s
exuberance. To be made into an instrument
that can catch God’s breath in a breathless
run of words. So he is here. Again,

scribbling this place into his notebook,
the steady pulse of a wave—“First, say, it is
an install of green marble knotted with
ragged white.” He knows nothing is missing
from this scene, nothing needs to be added,
the wind running loose, the sea seething,
but he senses the struggle between
losing the delight and abundance that is here
and the fear that his words turn
the world into himself. The wave is already

a “field of white lather” now,
its “richly clustered and crisped comb”
breaking, his words (such pleasure
and punishment in them!) like the sounds
of the wave going away, the moment
of the wave’s green turning cerulean
already a memory, an absence, the field
of white lather already dissipating into
(it seems as if he must alliterate now, words
like the ravenous open beaks of baby birds)
“threads and thrums twitching down
the backdraught to the sea again.”

Robert Cording is professor emeritus at College of the Holy Cross, where he was the Barrett Professor of Creative Writing. His collections of poems include Common Life, Walking with Ruskin, Only So Far (all from CavanKerry), and A Word in My Mouth: Selected Spiritual Poems (Wipf & Stock).

Image above by Aubrey Allison, used with permission.