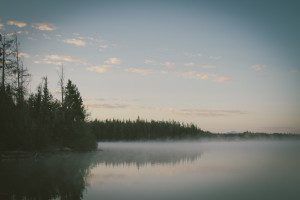 What attracts me to this poem is something deliberately absent yet evocatively present: baptism in a river. Starting from the very first line—during monastic prayer, the speaker’s mis-chanting “Lord’s forever” as “Lord’s river”—rivers are central to each vignette. There’s the creek where, as a kid, the speaker “took a girl down to the river to play—not pray”: that teasing echo of the song about river baptism. There’s the deer he then killed, stumbling “toward the Smith River”: its death “brought the Lord by the water.” There’s the speaker and his Dad fly-fishing, with the memory of his Dad as close to “a saint.” And finally, there’s the barge breaking up ice on the Hudson River outside the monastery as Matins is chanted. All these river images bring us close to the sanctifying water of baptism—close, but not quite there. Yet in a marvelously mysterious way, our baptism into Christ’s life and death is at the poem’s core.

“I Am Poured Out Like Water” by Win Bassett

I chanted Lord’s river during Matins. The psalmist had written Lord’s forever.
My mistake, of course, but I like my version better.
Christ’s body of skinny, flowing, noisy water reminds me

of the creek behind our house in Virginia. I felt him, playing as a boy in the woods.
My brothers and I built forts, caught crawdads under the cold rocks,
and checked our groundhog traps. We knew they were always empty.
I once took a girl down to the river to play—not pray.

The first, only, and last deer I will ever kill
stumbled toward the Smith River before it collapsed.
Dad and Papa met me by the water. We took the last photograph of him
before he died in two months’ time. Death brought the Lord by the water that day.

One summer in college, Dad and I fly-fished on a stream in Woolwine.
The afternoon was one of the few times we’ve been alone.
I can’t recall if we landed any trout, but it doesn’t matter.
He’s the closest to a saint I’ve ever known.

And today as I screw up the psalm, a barge breaks ice on the Hudson
outside the cloister walls.
Blue saturates the morning as we breathe the next psalm—
Praises of God in their throats.

Win Bassett’s essays have appeared in The Atlantic, Paris Review, Los Angeles Review of Books, and Guernica. His stories and poems have been published or are forthcoming in Pank, Ruminate, and Trop. A former assistant district attorney, he serves on the PEN Prison Writing Program fiction committee. He is fiction and poetry editor of the Marginalia Review of Books, managing editor of Yale’s Letters, and community manager for Bull City Press. He studies at Yale Divinity School.