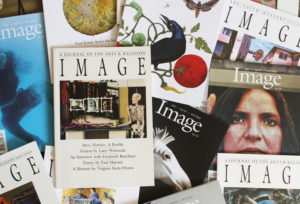 Up until this point, in describing what it’s like to read Image’s unsolicited manuscripts, I have not said much that an editor at any journal might not say, but of course, Image is not any journal.

“Art, faith, mystery” is on our masthead—and we have a long history and a community that expects work engaging certain themes.

In the sorting process, the question of whether a piece is “Image-y,” as I gracelessly put it in my notes to the editor, comes second, after I’ve decided that I think it’s good.

There could be, in theory, an approach to literature in which the two questions are really one question. That is, a belief that deep engagement with ultimate mystery is the thing that makes a piece of writing worthwhile—but that is not my school.

It happens at least once a quarter that I find a piece I love that, try as I might, I can’t justify for our pages. (I assume this happens when a writer submits without knowing much about us, and I find this forgivable since I know that getting published is difficult and the shotgun approach is efficient.)

Once I decide I like a piece, I’m willing to look pretty carefully for a reason it might fit. The issue before last included a story by Melanie Rae Thon about a mystical connection between a young woman who is killed in a car accident and the boy who receives her transplanted heart. The form is slightly experimental, with lots of white space on the pages—a rarity for us—and the point of view slides gradually from the girl to the boy, with several impressionistic stages in between.

The writing is beautiful; it’s also a little disorienting. There’s nothing explicitly religious here—no priest at the hospital bedside, no prayers, no vision of heaven. In my opinion, the story succeeds at a level that does not include religious meaning. An atheist friend says it’s her third favorite thing we’ve published.

But I also think Christians will read Thon’s story in a particular light, a light that adds meaning, because of the way we see ourselves as all suffering with Christ and being united through his suffering and death, and the way Paul describes the church as one body with many parts. I don’t know what Thon intended, but I think the story gains a layer by being published in a journal whose readers will recognize those echoes.

For at least a decade we’ve lived in a literary climate where, for instance, The New Yorker will publish a story like David Foster Wallace’s “Good People,” which takes the inner lives of two earnest evangelical Christians utterly seriously and declines to satirize them at all—and I’m thankful for this.

But Image still offers something unusual and, to me, important, in that we publish stories like Thon’s in a venue where a subtle but very real spiritual resonance can be heard. Examples of other stories that don’t use concrete religious elements but that I think gain a layer in Image’s context are Tim Farrington’s story about a gymnastics mom in issue 86 and Pinckney Benedict’s story about a lost aviator pursued by wild dogs in issue 57.

Because I’m also the copyeditor, I see these pieces again, a few months down the road, after Greg Wolfe has rendered a final decision and it’s time for them to go into print.

I’m reading very differently now: Should Cool Whip be capitalized? Do we need to know the chair is in the right-hand corner or will “corner” do? Does this particular sentence deserve to be an exception to my general dislike of beginning with “There is”?

And while I’m more or less picking nits at this stage, this is often the moment when I experience a piece’s real depth. On the first read, I’m racing to get through the pile. The second time, I’m going slowly.

This is even better than I remembered, is very often the feeling. That the stories and essays I’ve helped choose improve on careful rereading makes me feel proud—and a bit relieved.

I’ll end with an example. This issue includes a story by a writer named J.C. Rubin that I have a clear memory of falling for in my basement during my daughter’s nap. Here are first two sentences:

The cardiologist said Max Wody’s heart was hard as iron and that’s what killed him. It shouldn’t surprise you that these words offended his wife and three daughters.

At first, I stumbled. Whose story was this? The cardiologist’s? The daughters’? The “you” being addressed? And where are we? A hospital? A coroner’s office? As it turns out, no.

The brief sense of disorientation—the pitiless abruptness of death and the tactlessness of the cardiologist—are the backdrop of what comes next. The speaker is a recovering alcoholic who has returned to his hometown for the funeral of an old friend, where he encounters an alternate-reality version of his own life.

As the story unfolds, we realize just how fragile his state is. It’s not a redemptive story, but it makes certain longings painfully clear. We want to describe love and loss, but so often we’re reduced to bad poetry or to an inadequate catalogue of details that leaves out everything really important. The lack of articulateness at memorial services is the very thing that is touching.

As usual, it wasn’t until I reread it slowly, on copyedit, that I could see how well made the story was—in particular, how the narrator’s state is reflected in the rhythms of the prose itself, and how almost any part can stand for the whole.

When I emailed J.C. his proofs, he told me he was excited because this was his first-ever published story. He also told me that he has written thirty stories. Think of it. How many hours of starting at a screen does that represent? Some were probably throwaways, experiments.

On the other hand, maybe ours isn’t even the best one. And surely there are equally talented unpublished writers who’ve written more. It’s a near-paralyzing way of thinking about the haystack of manuscripts: how many hours of unseen work does a month of submissions really represent?

By necessity, my part of the publication process is a caricature of brutal efficiency. I’m trying to spend as little time with each manuscript as possible.

I don’t like my ingrained habit of fast reading and snap judgments. I don’t think it’s good for me as a writer—or a human being. I fear it makes me shallow. But a lot of tasks are competing for my time, so ruthless speed is part of the bargain of keeping the journal alive, and in a slightly perverse way I’m proud of that, too.

For the writers, it’s the opposite. Native talent cuts down on the amount of time it takes to make a sentence shine—but not all that much.

They say that people who love sausages should never see them being made, and I hope that my letting you into the kitchen hasn’t put you off Image. Because all of this messy work, begun by the writers at painstaking crawl and then finished by the editors in a rush, is redeemed when you unwrap your issue (or log in) and read.

Please, when you get your copy, take it slow.