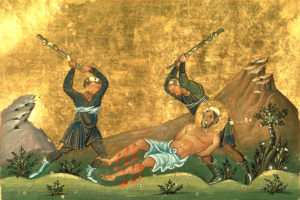 In this month of painful national and international news, Tania Runyan’s poem “Onesimus” offers a gut-deep breath of brotherhood. The poem recounts the story of Philemon, a new Christian Paul addresses on behalf of Onesimus, both Philemon’s fugitive slave and also a new convert. In “Onesimus,” Runyan singles out, perhaps, the most marginalized and voiceless in the ancient Greco-Roman world: the slave. Allowing him to directly address Philemon in a voice as ridged with humanity as a fingerprint, Onesimus focuses on images that establish the paradox the poem builds on. Gnashing lions who love “blood sweet with freedom’s fleeting breath,” flesh-splitting lashings, and even a branding are all, within the context of the narrative, lawful punishments for Onesimus’s failed escape. But the poem uses the raw imagery not to merely implicate Onesimus but to tether the reader to Onesimus’s plight much the way it tethers Onesimus to Philemon. In the last lines, the poem completes its shift from Onesimus’s plight and toward his humanity in his use of the powerful and symbolic “I am.” Onesimus cannot escape Philemon nor can Philemon escape Onesimus—either his suffering or his humanity. This revelation lodges itself into both the reader’s chest and into Philemon’s life to “pump forgiveness and prayer through your veins /…make you / see Christ in every jangling harlot….” It’s the image of both men being bound to one another that moves the poem toward a radical brotherhood that makes them both equally “a slave to God’s bidding.”

Since I stole your money, Philemon, and even more, myself, the body
that broke earth and stacked stones at daybreak while you slept,

you have every right to lash me till the whites of my intestines show,
brand FUG on my forehead, or throw me to the lions, who love especially

the taste of escaped slaves, our blood sweet with freedom’s fleeting breath.
But Paul, wild-eyed with Christ, has washed down his prison walls

with prayer. He knows you will take me back, not a slave, but a brother
delivering koinonia to your congregation in this present evil age, teaching

how to pray paralytics into motion and how to sleep in peace
when soldiers sharpen swords outside your windows. Paul calls me his son, no—

his very heart. I am no longer your body but will reside in yours,
pump forgiveness and prayer through your veins. I will make you

see Christ in every jangling harlot and rotting, leprous face.
I will make you a slave to God’s bidding.

Image above is an icon of St. Onesimus, used by permission with a Creative Commons license.