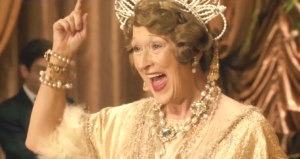 In many respects the new film Florence Foster Jenkins takes a paint by numbers approach to its genre—the classic biopic. It features a meaty role for a star (Meryl Streep), designed to play well to Oscar voters in the next awards cycle. It gets a lot of mileage—comic and dramatic—out of contemporary differences with its chosen time period (1940s New York). And of course it follows a well-worn dramatic arc: historical figure faces personal and professional tragedy, falls to a low point, then overcomes through the power of the human spirit.

In one very important respect, however, Florence Foster Jenkins stands out: its choice of subject. Unlike the typical biopic the film does not focus on someone of extraordinary ability or historical significance. Instead it examines the final days of a woman more notorious than famous.

Florence Foster Jenkins graced (if that’s the word) the stages of many concert halls in her day and took on the most famous arias ever penned. Such a feat becomes more impressive when considering that Jenkins must rank as one of the worst singers ever put on record. Her voice is quavering, her sense of tempo nonexistent, but even these issues shrivel next to the real problem: she seems barely acquainted with the idea of pitch.

I was introduced to Jenkins’s corpus a few years back by my sister, who knew that the woman’s utter lack of ability, coupled with an undeterred confidence, would appeal to my taste for the absurd.

A funny thing began to happen to me as I chuckled my way through her catalog, however: I began to feel a genuine admiration, untainted by irony, for her mission. Viewed from one angle, I suppose, Jenkins could seem like just another example of the rich and powerful abusing their privilege: an heiress using her fortune to promote herself.

As the film points out, though, Jenkins, by all appearances, sang not out of a desire to be seen but from an unfettered, unquenchable love of music. Songs burst out of her because they could not be contained within.

Jenkins, then, was an amateur, in the purest sense of the word: one who loves. Even if she lacked the most basic skills to carry her love to completion, she could not be stopped from pursuing her passion recklessly, at the cost of her own reputation and dignity. True, she seems for much of her life to have remained blissfully ignorant of her lack of talent, but in the end she could not avoid the true opinion of the public, who preferred to laugh at her rather than thrill alongside her. And yet she persevered, true to the inner love which licked at her like a flame.

I’ve always had a thing for such fools. I suspect that, as a moderately talented person with an intense sense of self-scrutiny, I envy the ability of the talentless to abandon themselves to pure ecstasy. As a lifelong cellist of middling talent, and a current would-be writer and would-be academic, I look around at the more skilled pliers of my trades and feel only discouragement, disbelief that I could ever reach their heights.

What acts of beauty have I foregone in my life out of fear?

So I look to Florence Foster Jenkins and those like her for inspiration. When discouraged in my music I think of Jenkins, or perhaps of the Portsmouth Sinfonia, an orchestra composed of nonprofessionals whose version of Also Sprach Zarathustra is a terror to behold.

When down about my talents as a writer I contemplate the painfully earnest poetry of James McIntyre (who once wrote a poem called “Ode on the Mammoth Cheese,” which just about sums it up), or writer/directors like Tommy Wiseau, who refuse to let their vision be stalled by their utter unfamiliarity with the language of film.

In a certain sense, these madcap creators are a subspecies of holy fools, dancing like David before the Lord, to the embarrassment of others. Purity of heart, as Kierkegaard says, is to will one thing, but such purity often looks like madness to those around us. Holy fools are easily dismissed, perhaps, but they refuse to go away entirely, haunting us in their childlike devotion to the better things, love of God and neighbor.

That’s why I’ve always loved Brother Juniper, the simple but devout companion of St. Francis. Almost every story of Juniper recorded in the Little Flowers involves him ignoring his earthly responsibilities in order to better contemplate holiness. He gets into all sorts of scrapes and heartily annoys the other Franciscans, but Francis himself always embraces Juniper as one who chooses rightly.

This is the full truth of holy fools, I suspect: they can be hell to live with, but they convict us with their self-abnegating devotion.

Music isn’t quite as good nor holy as prayer, but I find the quixotic attempts of Florence Foster Jenkins nearly as inspiring as those of Brother Juniper. If we are to praise God in accordance with our talents, then those of us with less natural ability need perhaps sing a little louder and with more passion.

To the outer ear, there’s more pleasure in a solid but uninspired performance of the Queen of the Night’s aria than in Jenkins’ cracked, ersatz interpretation, but the inner ear understands, and judges rightly in favor of the hopeless, hopelessly devoted song.

Asher Gelzer-Govatos is a PhD student in Comparative Literature at Washington University in St. Louis. His reviews and writing have appeared in outlets like Books & Culture, The A.V. Club, and The Hedgehog Review. He lives with his family in St. Louis.

Image above is a still from Florence Foster Jenkins.