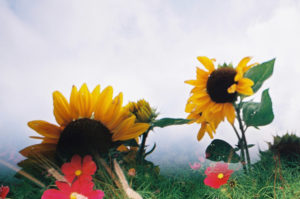 What I like about this poem is how it slides almost unnoticeably from a simple, upbeat view of life into increasing complexities and ambiguities. The title and opening stanza announce that this will be an unequivocally optimistic poem. But something a bit unnerving happens in the second stanza: that glorious golden sunflower’s head seems to start choking (“grasping / its cowled neck”)—because, the following single line stanza tells us, its head is “outweighing its stalk.” It’s an image of discomfort, distress, almost of disease. The next stanza “recovers” the poem’s opening optimism, with the sunflower now “full bonneted” and turning toward “absolute light.” The “light” is the sun, of course, but it also hints (in “absolute”) at the divine; and, further, it seems to counterbalance the heaviness of that head outweighing its stalk. “What wonders are these,” the poet continues; and we think we’re back in full recovery mode. But no: the “wonders” are a “struggling” and a confusion of contradictions. Those birds’ chirps: are they joy or sorrow? They “could be” either; we just can’t know. Then in the final three lines, the poet pulls back from nature’s phenomena to “this world,” where ambiguity reigns. In this world of ours, the weak get stronger—or maybe not: maybe gradually, painfully, inexorably (“a day at a time”) they drag to a snail’s pace, drying out till they “crack.” I’m amazed at how, in so few short lines, Judith Harris has imaged with such nuance the push and pull, the downs and ups, of being alive.

Under a canopy of leaves,
the irises, bountiful,
the calico butterfly flashing

and this one golden head
of a dazzling sunflower grasping
its cowled neck,

in order to turn,
full bonneted,
to the absolute light.

What wonders these are:
things struggling
filament by filament,

birds twittering in a laughter
that could be weeping,
barely feeling the twinges of this world,

where the weak get stronger
or snailish with cracks

Judith Harris is the author of the poetry collections Atonement and The Bad Secret (both from Louisiana State). Her critical book, Signifying Pain: Constructing and Healing the Self through Writing, was published by the State University of New York Press in 2003. Her poems have appeared in the Southern Review, Antioch Review, Ploughshares, American Scholar, Prairie Schooner, and Boulevard.

Image above by Nick Page, used with permission under a Creative Commons license.