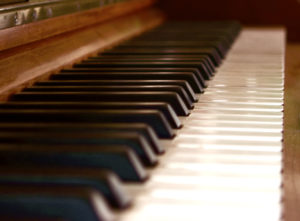 Poetry can recall us to the sensuousness of ordinary experience. Elizabeth Smither does this in “The Embrace” through the pointed choice of particular details. We are invited into a room in which almost nothing is happening, yet the room fills with sumptuously imaged life: two pianos which seem to be playing (though literally they’re not); two people leaning joyously into each other; a meal appearing in all its lusciously itemized dishes. All of this takes place in only two sentences—for it’s in the dashes that Smither makes the poem work. Each pair of dashes holds within it an instant of event, while holding still the surrounding objects. What these dashes manage to do, I’d say, is hold aloft the simultaneity of music and meal and human embrace. The poem leaves me feeling richer, yet also wondering what rich details I’m missing in each moment of my own experience.

“The Embrace” by Elizabeth Smither

Between two pianos pressed in the dining room
a full-size dark grand, a walnut upright
beside the dining table on a mat—
the room was crowded but you pressed

the serving dishes of red and green
vegetables. Just time—you’d flung
your coat on a tall hat stand
and glanced at an open music album

the way the iris in the vase on the black surface
of the grand gave back its reflection to itself—
together, just lightly touching at the shoulders
but such desire in the backbones, such

pure melding while someone sought the scissors
to cut the string and the butter pooled
over the peas and the carrots and all
the unplayed music played in silence.

Elizabeth Smither has published fourteen collections of poetry, including A Pattern of Marching (Auckland), winner of the New Zealand Book Award for poetry, and The Lark Quartet(Auckland), winner of the combined Montana/New Zealand Book Award for poetry. She is the third person and first woman to serve as the Te Mata Estate poet laureate, during which two-year term she wrote Red Shoes (Godwit). Her most recent collection is A Question of Gravity, edited by John Kinsella (Arc).

Image above by Ralf Nolte, used with permission under a Creative Commons license.