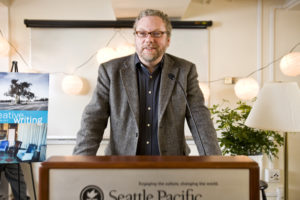 This post is excerpted from Gregory Wolfe’s final commencement address as director of the Seattle Pacific University Master of Fine Arts in Creative Writing last month. Wolfe, who founded the program, steps down as director today. Read his full announcement here.

Once upon a time—well, seventeen years ago, to be exact—I was contacted by Mark Walhout, the chair of the English department at Seattle Pacific University to consult with him regarding the possibility of SPU starting an MFA program in creative writing. He felt that as editor of Image I had the right sort of contacts to recruit faculty—and perhaps a bit of credibility with the literary community—to help kick-start the process.

“How odd that you called about that,” I said. “One of the long-term dreams among the Image editors has been to get involved with the founding of an MFA program.”

“Well,” he responded, “how would you like to come out here and start the program for us?”

I’d like to say it was as simple as that but these things take time and lots of elbow grease. We did indeed come to SPU but we still had a long road ahead of us. There was the matter of settling down, establishing the journal in a new location, and launching an extensive research process for putting together an MFA program proposal. A graduate writing program that sought to educate students in the light of the rich theological and literary heritage of the Christian faith had never been attempted before and we knew it would be looked upon with close scrutiny and even skepticism.

What might such a program be all about, people wondered? Would it be a factory for churning out writers of “Christian fiction”: Amish romances, apocalyptic thrillers about the Rapture in which everyone but registered Republicans would be left behind? Would it produce writers who were simply preachers in disguise but who happened to know how to consult the Oxford English Dictionary for a few fancy words?

It helped that Image journal had established a track record for preferring a much different vision of literary art, one that took its cues from classic authors from Augustine and Dante to Flannery O’Connor and Annie Dillard—artists whose works didn’t treat religious faith as a series of abstract propositions but as a way of seeing the world, one that the writer had to embody in the concrete particulars of everyday life.

We were determined that there should be no doubts about our commitment to excellence. Another founding principle of the program was that faith is not a shortcut in the arduous process of mastering craft. To establish our standards, we studied the curricula of the best, most rigorous low-residency programs and promptly made our own requirements even more demanding.

Like all MFA programs, ours would be grounded in the process of mastering craft, but that effort would be leavened by a deep concern for vision—in other words we would focus on form but also content—so that our graduates would be reminded that writing is not just verbal pyrotechnics but a passionate act of discovery, a hunger for the rich, often elusive truths about the sorrows and joys of the human condition.

Writing words under the shadow of the Word himself, our students would always know there was something larger in the room than their own ego—and, knowing that, they would be freed to face the tasks ahead of them with a lighter spirit.

And so eleven years ago, Robert Clark, Leslie Leyland Fields, Paul Mariani, and I sat down with a dozen apprentice writers to embark on an adventure in using human words in light of the divine, creative Word that spoke the world into existence.

As the years unfolded several things became abundantly clear: the bonding between students at each residency was fast and strong, like some kind of super-nano-glue created at jet propulsion laboratories. Also, the need to balance the intense labor of the residencies with, well, intense play became evident. And so a poetry competition that originally began with the challenge to write a haiku incorporating the phase “crab artichoke dip” grew into full-blown satirical skits of such…dare I say boldness? that they could only be broadcast on a premium cable channel.

This made me very, very happy. Only those who live out an incarnational faith can understand how closely interwoven the sacred and profane really are. And that reverent irreverence is precisely what has given this program its entirely bearable lightness of being.

Once, when officials from the national Association of Writers and Writing Programs came to a residency to prepare a thorough assessment of our program, the executive director turned to me at the lunch table and said: “You’re putting Prozac in the water, right?”

“Well,” he replied, “I’ve never encountered a happier MFA program in my life and I’ve done dozens of site visits.”

I don’t want to suggest that it’s been all unicorns and rainbows. This is an arduous program and it has to be undertaken in the midst of life’s craziness. But when things get tough, students and mentors alike have come together time and again to support and help each other.

With well over a hundred graduates—many of whom have gone on to publish books, as well as in dozens of magazines, journals, and websites, not to mention winning prizes and competitions, landing jobs in universities and a host of other places—we can sit back and marvel at how far we’ve come. And we’re only just getting started.

With a poet and essayist of the caliber of Scott Cairns, the SPU MFA has a new director who will take the program to even greater heights.

The decision to let it go is also one of the hardest things I’ve ever done. I’m an accumulator, not a relinquisher. The Lord has blessed and cursed me with being good at more than one thing and the problem is that building institutions—one thing I’m pretty good at—tends to make it very difficult to actually get much writing done. I hope that as I have attempted to nurture and support your writing vocations, you’ll give me your blessing to take up some long-delayed book projects of my own.

There is also Image, who, using my wife’s colorful metaphor, has turned out to be a high-maintenance mistress who starts calling the home number and demanding that I take her to dinner and a show. In short, a journal is harder to sustain than a graduate program, believe me, so say a prayer for Image, which was the midwife at the birth of this program.

Needless to say, I have a long list of people I’m grateful to, including all the program coordinators and faculty as well as the students and alumni. You sustain me in countless ways.

Gregory Wolfe, the founder and editor of Image—one of America’s leading quarterly journals—is Senior Fellow at the Institute for Catholic Thought and Culture at Seattle University. He edits a literary imprint, Slant Books, through Wipf & Stock Publishers. He served as the founding director of the Seattle Pacific University MFA in Creative Writing program. Wolfe’s books include Beauty Will Save the World, Intruding Upon the Timeless, and, most recently, The Operation of Grace. Follow him on Twitter: @Gregory_Wolfe.