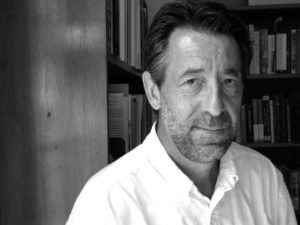 Scott Cairns, the author of numerous volumes of poetry, a convert to Orthodox Christianity, and a longtime contributor to Image, has often advocated what he calls a “sacramental poetics”—the idea that a poem should not so much describe something as do something. Mary Kenagy Mitchell interviewed Scott Cairns for Image.

Image: Your poems use an exacting, prophetic voice, but they’re also very funny. Where does that voice come from? Is it with you all the time when you’re going through your day, driving around doing errands? Has it always been with you? Or is it something you consciously invented, that you have to work to generate?

Scott Cairns: I think it’s been with me for a while—thirty years or more—but is surely something of a hybrid of a host of literary voices that appealed to me early on, as I was becoming serious about reading and writing. I’m sure there are traces of C.S. Lewis, W.H. Auden, William Stafford, Wallace Stevens, Rainer Maria Rilke, Constantine Cavafy, and G.K. Chesterton in that hybrid. Also, I grew up in a house where the pun reigned supreme—that may be, in part, where the humor comes from.

Image: One of your poems in the new issue of Image [68] is called “a psalm of Isaak.” What’s the significance of that? I think you’ve used that name more than once in your poems, right? What do the Isaak poems have in common?

SC: Well, when I became Orthodox, I took Saint Isaak of Syria as my name saint, mostly because it was in reading his homilies that I was finally drawn to what we call “the fullness of the faith” in Orthodoxy. My friends among the monks on Mount Athos and my friends in Thessaloniki actually know me as Isaak. That is to say, Isaak is my own Christian name, and I’ve enjoyed insinuating that name into a number of poems over the years, most recently the “Idiot Psalms,” my current book project.

Image: I got to meet your family a few summers ago. It sure seems like you guys have a good time. What are you like as a dad?

SC: I think I do okay. I know I’m a better dad now than I was at first, more patient, less anxious. I love my kids so much that it aches. I had a wonderful role model in my own father, who pretty much modeled fatherhood as a vocation, a holy undertaking; and I also share the parenting with Marcia, who is also lots of fun, so yes, we actually do have a very good time.

Image: You write a column for The Huffington Post. How did you get connected with them? What has that experience been like? Do you read the comments people leave? What kind of reception does religion get in that venue?

SC: The publicity folks at Paraclete Press got that started, putting me in touch with the editors of the Living section of Huff Post. After a few posts, they moved me over to the Religion section, where the comments became a little nuttier. I do read some of the comments, but generally don’t read the ones that demonstrate that the writer didn’t actually read my post, and is mostly just venting in a very general way.

The reception at Huff Post is complicated, for sure. On the one hand, Arianna Huffington is a practicing Orthodox Christian, so I’m guessing that she sees religion as having a necessary place in the public conversation; on the other hand, a good many of my fellow Lefties seem enraged that she has insisted on that.

So, very often, the comments reveal that a good many progressive types can’t understand how any of their fellow-travelers can also embrace religious faith; I, on the other hand, can’t quite understand how so many of my fellow Christians manage so easily to embrace a selfish materialism and an anxious political conservatism—which strike me as patently faithless.

Image: Tell us about the new magazine you’re involved with. It’s based at an Orthodox college, right? Is it possible to talk about a specifically Orthodox aesthetic in contemporary writing in North America? And if so, how would you describe it?

SC: Yes, Saint Katherine Review is a new journal coming out of a new college. Saint Katherine College in Encinitas, California will be the first Orthodox liberal arts college in America, and is now accepting applications for their inaugural class; they open the doors in fall 2011. I have some great folks helping with the editing: Kathleen Norris is handling the creative nonfiction, Claire Bateman is handling poetry, and Caroline Langston is handling the fiction. Our premier issue comes out in January, 2011.

I wouldn’t say there is a specifically Orthodox aesthetic, but I would say that there is a rich literary aesthetic—variously characterized—that is essentially Orthodox in its apprehension of the God’s enormity and of the vertiginous expanse of the God’s creation. Anytime you have writers who trust the labor of language to reveal to them (and subsequently to others) a textured and inexhaustible reality that isn’t circumscribed by expectations and intentions, then you have work that strikes me as Orthodox at heart.

On the other hand, anytime you have denotative documents posing as literature, you get instead a sad, small, scholastic, and meager bit of pretense—no matter what you call it.

SC: Well, my thinking has changed a bit; for one, I’m less pleased with the word sacrament (a legal term coined for a mostly unfortunate western theology by Tertullian, after all) and prefer the more likely mysterion, or mystery. So, I suppose for now I’ll roll with “mystical poetics,” though even that is too susceptible to all kinds of goofiness.

Now, as to what I’m after with any of these gestures: So long as we understand our literary texts to be merely tokens referring to our prior ideas, we are denying the efficacious power and presence occasioned by our words. On the other hand, when we come to appreciate that our words have power, presence, and agency to shape our persons (including but not confined to our person’s ideas), we get a glimpse of the inexhaustible One in whom we live and move and have our being.

A mystical poetics, then, carries the premise that the stuff of language, duly engaged by the worker in language, can be a source of revelation. There are, of course, all kinds of preconditions for language doing that in any reliable way; for starters, the worker should be working on what we in the business call purification, thereafter, illumination, and, God-willing, theosis.

For all the yammering host of self-identified “theologians” we suffer, there is no such thing as a theologian who has not undergone purification, illumination, and has tasted theosis. To presume to write theology, depending upon scholarship and speculation, without having lived this sanctifying process, is to guarantee heresy—not to put too fine a point on the matter.