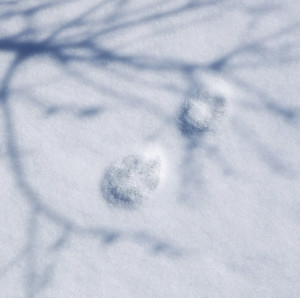 What do we understand? What do we even mean by “understanding”? A poem can pose these questions, explicitly or implicitly. Amy McCann’s “Winter Song” does both. She wonders what her father was thinking, was understanding, on a long-ago cold morning before she was born. Meanwhile she, in the warm womb, was a “restless / percussion of heels,” just an “idea.” Why was she coming into this life, the poem asks. Maybe we never know the whys of our existence. Her father’s lack of understanding back then, her own now: this isn’t much, she acknowledges, to hold onto. Yet the poem does offer an understanding, and it’s through images: the closing images of palm, place, and snowflake. These do “disappear” as they land at the poem’s end; yet the disappearance isn’t distressing. There’s a lightness of touch throughout the poem, as it holds at once both warmth and winter’s cold.

Pen-sketch trees.
At the curb, tattered collar of snow.

What did my father think in those chilly
early-morning diner kitchens as he unloaded the blue
plastic flats of plastic-bagged loaves?

This was 1978, January, a synchronicity
of blackbirds releasing from the First
Methodist bell tower. His name

a gold-stitched corsage on his uniform pocket
not yet my name, and me
an idea, a rustling

in the belly, restless
percussion of heels. Was it, Come into

this life I’ve created, am keeping
for you? Let me feed and be
fed by you? Maybe

he couldn’t understand, as I don’t now
understand these certain seasons

of cold, when the world wants nothing
but a warm palm, a place
to land like a snowflake
and disappear.