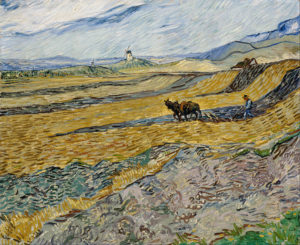 This post, which appears as the Editorial Statement in Image issue 90, is continued from yesterday.

Miguel de Cervantes Saavedra, a contemporary of Shakespeare, knew his share of failure.

As a young man he went off to serve in the military—whether to escape arrest for wounding a man in a duel or for some other reason remains unclear. As a marine he participated in the fateful battle of Lepanto, in which the naval forces of the Ottoman Empire were decisively defeated. On another expedition he was captured by pirates and spent five years as a slave in Algiers before he was finally ransomed and came home.

His efforts to support himself with his pen met with little success. Neither did his petitions for compensation for his war service. He was imprisoned twice and only late in his life did the publication of Don Quixote ease his financial woes. He died soon after its second volume was brought out.

The origin of Don Quixote—the grain of sand that eventually became the pearl of a literary masterwork—was Cervantes’s intense irritation with the continuing popularity of medieval tales of chivalry and romance. These fantasies reveled in outlandish plots crammed with necromancers, dragons, giants, and noble ladies served by puissant and virtuous knights errant. In the waning years of Spain’s golden age, as the optimism of the Renaissance evaporated in wars and dynastic struggles, they struck him as fatuous nostalgia. They drove Cervantes nuts.

So he made his protagonist the world’s greatest fanboy of chivalric romance and delighted in the innumerable follies brought about by Don Quixote’s perception of roadside inns as castles and sturdy peasant girls as elegant damsels of the court. The Knight of the Woeful Countenance sees wonders where he should see the most pedestrian things—and it constantly gets him and those he seeks to help in hot water.

But somewhere in the process of imagining and writing this first great work of fiction, something strange and magical occurred. As if transformed by the spell of a powerful wizard, Cervantes fell in love with Don Quixote and his seeming madness. Because, in the end, the knight is only mad north-by-northwest.

As the critic Mark Van Doren once pointed out, the secret to understanding Don Quixote is that he makes a rational decision to become a knight—and that in choosing to act like a knight errant he truly becomes one. There is no pretense in his actions, no feigning. There is only faith.

The critics often point to the apparent savagery with which Cervantes flays his hero. Why doesn’t the narrator ever soften the blow? The key to this conundrum is that Cervantes had been deeply influenced by the Renaissance humanists, who championed irony as a subtle means for drawing readers into a story.

In many ways it is impossible to conceive of Don Quixote without understanding the pervasive irony employed by the humanist Erasmus in The Praise of Folly. In that book Folly speaks in her own praise, detailing the polymorphous perversity of her human acolytes. Yet at the end Erasmus pulls a U-turn, and Folly is suddenly seen not as mere waywardness but as an incarnation of true faith—the very spirit of the Gospel’s praise for the foolish and the childlike.

In a magisterial book on Don Quixote, Miguel de Unamuno spoke of the genius of Spanish mysticism—the faith of Teresa of Avila, John of the Cross, and Ignatius of Loyola—not as a rejection of rationality but as a perception of the “intolerable disparity between the hugeness of their desire and the smallness of reality.”

Quoting this phrase, the critic Simon Leys notes that Don Quixote’s adventures demonstrate this disparity, that Christianity itself is “a religion for losers.” “The successful man adapts himself to the world,” Leys writes. “The loser persists in trying to adapt the world to himself. Therefore all progress depends on the loser.”

Suggestive as these thoughts may be, the ending of Don Quixote seems to contradict them, because on his deathbed the Knight of the Woeful Countenance abjures his knight errantry and dies a broken man. But then another piece of magic takes place. Sancho Panza, the voice of realism and common sense throughout the book, who has suffered a great deal himself at the hands of his master, cries out in alarm.

It seems that this man, who began following Don Quixote out of greed, has acted faithfully and thus become a man of faith. As Leys writes, in the end “Sancho found that he had inherited his master’s faith; he had acquired it simply as one would catch a disease—through the contagion of fidelity and love.”

When Don Quixote looks out at the world he sees signs and wonders. We laugh because he’s mistaking the most tawdry and ordinary stuff for nobility and glory. Why can’t he see the world as it is? But I defy you to read the book and not become a convert yourself.

Somehow I don’t think the discipline of Egyptology has suffered much because of my failure to embrace it. I’ve chosen foolishness again and again, as I’ve been told again and again, most particularly when I’ve been counseled about the folly of trying to keep a literary quarterly like Image alive—a print quarterly in the age of Twitter, an enterprise that attempts to span political, theological, and aesthetic divides rather than pandering to one side or the other in exchange for money and power.

In his final years my father would persistently and extravagantly praise me for being successful. He said it with childlike wonder, like it was the bicycle under the Christmas tree that he had always wanted. It broke my heart. So many times I wanted to protest, to tell him that no, I was a failure, too, that I’m one of the biggest losers out there, if only he knew how many times I’ve been knocked on my ass.

I am my father’s son. But this I know: faith follows action.

The above image is by Vincent Van Gogh, [Public Domain], via Wikimedia Commons.