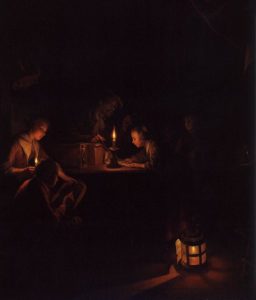 Christmas carols: we love their joyous celebration of the birth of Christ. In “Carol of the Infuriated Hour,” David Brendan Hopes takes the carol form—its rhythm and rhyme scheme—to present a more complex view of the Christmas event. The poem’s speaker has “warred” with God, but  he decides to cease his struggle “for the sake of this season in the stories.” The stories are the traditional ones of “talking beasts” and the “Christmas rose” and “the white stag in the tangled wood” (a medieval image, with Christ as the pure white stag and the tangled wood as the Cross that awaits him). To what extent is the Cross embedded in the Christmas stories? This is the question that the poem explores. In stanza 3 the speaker seems to resent bringing the Cross into Christmas (“they who stole / the stories have the stories wrong”). But in the following stanza he sees as salvific “the Cross and the Rose on the same snow hill.” Torn between these two attitudes, he feels “infuriated.” Yet the poem’s extraordinary closing image “saves” him — saves all of us (since the poem’s “I” has changed to “we”). The very cosmos, “newborn” when the Word becomes flesh, is cradled in our own arm—as the cosmos too becomes motherly, murmuring to the Child. Yet even in this cosmic salvation, ambiguity creeps in. Is “crooked” the one-syllable verb meaning “bent,” as we bend our arm to cradle a baby? Or does it hint also at the two-syllable adjective “crooked,” meaning “criminal,” and hence at the Cross? The poem’s achievement is that, in the softening motherly image, it moves to a (literal) embrace of the paradox of the cradle and the Cross.

“Carol of the Infuriated Hour,” by David Brendan Hopes

The stab to the heart that is such music,
the light beyond brightness that is such sight—
For the sake of this season in the stories
I will cease my wars with God tonight.

I will choose, with open eye, the talking beasts,
the white-in-the-snowdrift Christmas rose,
the legends of wandering a bitter way,
high hill and desert, for what? —God knows.

Someone turned the rose-tree to a cross
and the angels’ thunder into penitential song:
such is the ancient sorrow: they who stole
the stories have the stories wrong.

What saved the old ones in the tangled land,
amid assorted enemies, is what saves still:
to see the white stag in the tangled wood,
the Cross and the Rose on the same snow hill

We are saved in our infuriated hour—
by cunning blackened, by omnipotence beguiled—
by the newborn cosmos crooked upon our arm,
motherly murmuring to him, child, my child.

David Brendan Hopes is a professor of literature and language at the University of North Carolina at Asheville, founder and editor of Urthona Press, and founder and director of the Black Swan Theater in Asheville. He is the author of A Sense of the Morning (Milkweed); The Glacier’s Daughters(Massachusetts), winner of both the Juniper and Saxifrage Prizes; and A Dream of Adonis (Pecan Grove). His work has appeared in the New Yorker, Audubon, Christopher Street, and The Sun.

The above image is by Gerard Dou, [Public Domain], via Wikimedia Commons.