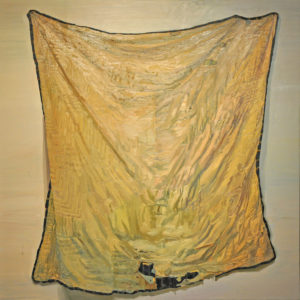 Homely, decorative, domestic—that’s how most of us think of quilting: something a sweet grandmother does while humming an old tune and waiting for a pie to cool on the rack. It’s a comfy-seeming practice we associate with homemaking and mothering—vocations mostly overlooked and never accorded the worldly esteem we give to the artist, composer, intellectual, or CEO.

But of course we all know that it is mothers and grandmothers who carve out large spaces in their lives to nourish and raise us and set us free to write, paint, dance, read, play our music, or rule a great nation. Without mothers, we perish, yet they are routinely sidelined. We roll our eyes at their sentimentality and protective nagging.

Shattering these stereotypes and setting this serious art form front and center is the subversive painterly realist, Sedrick Huckaby.

For more than a decade, quilts and the communal ethic surrounding their making have been a major preoccupation of Huckaby’s work as a painter—both at a theoretical level and in the physical stuff of his heavily painted canvases. He also makes colossal portrait heads of ordinary folk whose lives are off the radar of the star-making machinery of the art world. Yet these are Huckaby’s people, whose lives and occupations are worthy of his most passionate and sustained work.

Huckaby has gotten national and international attention for his art in all the most respected museums and art venues, yet has steadfastly stuck to domestic African American life as the main source of his inspiration and practice. He calls this source “everyday glory,” and he chronicles the dignity and insight and beauty produced in the world of mothers and grandmothers, in local church quilting groups, and found in the faces of ordinary folks, people working in service professions.

His monumental canvases are thickly painted with rich, nuanced color and powerfully expressive brushwork, arresting our attention and signaling significance in seemingly unimportant lives. Like Linda Loman in Arthur Miller’s Death of a Salesman, who poignantly cries, “Attention must be paid!” Huckaby seems to emphatically call us back from our culture of celebrity, conspicuous consumption, and vanity.

Sedrick Huckaby is a committed Christian unashamed of his strong religious roots. His work has a kind of religious undertow—a strong, tidal pull of allusive symbolism embedded in the everyday glories he paints. One such work, Filthy Rags of Splendor, is remarkable for just this kind of subtle but unmistakable symbolism.

In Splendor the painter has constructed a giant canvas of bravura brushwork and close tonal and chromatic shades—the subject a disheveled white quilt apparently thrown across an invisible bed. At nine by nine feet, the painting envelops the viewer in a geography of folds and coruscations of brilliant but stained cloth, lovingly painted in high realism. So heavily tooled is the paint that the quilt seems to bulge and thrust itself into the viewer’s space. This is no quaint product of a clichéd pastime.

Splendor has a strong composition where folds of the quilt seem to sway and thrust in a V shape, protruding in ways that evoke a tortured human body—arms spread as on a cross, though no figure is depicted. The “skin” of the quilt even feels like flesh in places, with hints of a human face in the brushstrokes. The quilt is empty (like Christ’s tomb) yet the overtones of suffering and rejection—even crucifixion—are palpable in this apparently empty painting. The sufferings implied could be those of both Christ and everyman.

The very fact that the artist chose to paint a white quilt, stained and twisted and thrust into the sanitized space of the proverbial white cube of an art gallery—this is Huckaby’s stock in trade: he is quietly subversive, dignifying the mundane and showing that tragedy and comedy, sadness and joy, catastrophe and redemption happen here where we live.

In Filthy Rags of Splendor we might well be looking at the only blanket owned by some sharecropper, worn to a mere rag. But upon close inspection we also glimpse something like the Holy Sudarium—the cloth used by Saint Veronica to wipe the bloody face of Jesus as he trudges the Via Dolorosa, and which later became a continual theophany, a showing forth of the holy face, a portrait “made without hands.”

The stains and rips and frayed edges of the quilt are simply the dumb fact of wear and tear on an old bedspread, and yet they also point to the upside-down kingdom of Christ’s love and sacrifice, the ultimate covering for sin—the sign of the unexpected Messiah and fulfillment of Isaiah 53: “He hath no form or comeliness that we should look upon him…no beauty that we should desire him…but he was wounded for our transgressions, he was bruised for our iniquities….”

Huckaby did his undergraduate work at my alma mater, Boston University College of Art. He later entered the prestigious MFA program in painting at Yale University, but unlike most of his fellow graduates, he never moved to one of the centers of the art world—New York or Los Angeles—but returned to his home in Dallas-Fort Worth to be near family, including his grandma, Hallie Beatrice Welcome Carpenter, “Big Momma.” She is the subject of many of his paintings and a strong influence on his sense of vocation and choice of subject matter.

Sedrick Huckaby has managed to stay true to himself, his family, and to a rigorous practice of lovingly recording the world he knows with great sincerity, revealing a depth of religious wisdom seldom found in contemporary art culture, laden as it often is with fashionable irony. His homage to the mothers of his community, to their great care and sacrifice, and his tough and painterly brand of realism point to a great love, a compelling vision of faith and yearning.

In this, his work echoes John Coltrane’s masterpiece A Love Supreme, the title of which Huckaby borrowed a few years back for a major project—an eighty-foot, four-paneled painting partly funded by the Guggenheim Foundation. As a painter myself, and one committed to attempting the seemingly impossible task of renewing sacred imagery in our times, I find the work of this younger painter powerfully motivating—and deeply encouraging. He richly deserves the widespread critical acclaim and success that his art is garnering.

Bruce Herman is a painter and the Lothlórien Distinguished Chair in Fine Art at Gordon College in Wenham, Massachusetts. His website is www.bruceherman.com.