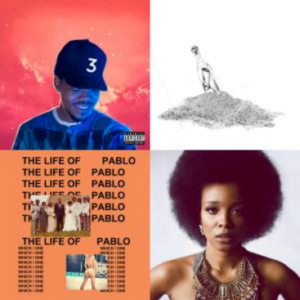 You do not have to feel guilty about loving music. Please keep this in mind. Alan Jacobs, in his The Pleasures of Reading in an Age of Distraction, writes, “read what gives you delight…and do so without shame.”

Amen, I say, and don’t be afraid to apply this to the music you like, too. There are no guilty pleasures. Listen to what moves you, regardless of whether you think you are supposed to like it, or it is good for you, or whatever.

Here, then, is my annual playlist. If you’ve been reading Good Letters for the last nine years, you know the drill: sixteen songs for 2016, each of which got ahold of me this year, for some reason.

One change this year: I’m allowing 2015 songs that I only discovered this year. Another change: I’m using Spotify now. (Click here to access the playlist.) I’m still on the fence about whether streaming is a good thing for music, but it’s been good for me this year. I’m also thinking about getting a record player. It’s a strange time.

Spotify has this thing called “Discover Weekly.” Every week you get a customized playlist based on an algorithm that I guess looks at what you’ve been listening to and guesses what else you’d like. And it is always right.

Not only does it frequently give me tracks I have described, out loud, years ago, as my all-time favorite songs, it just as frequently gives me things I’ve never heard of that are astonishingly great, like “40 Rods to the Hog’s Head “ by Tera Melos. It also makes assembling playlists like this one incredibly easy.

This mix feels quite thematically cohesive to me, though I couldn’t exactly name the coherence, as usual. Somehow I feel there’s an equal measure of joy and resignation in most of these songs.

The title I chose for this post (which happens to be the motto of the University of Alberta) is Latin for “whatever is true,” from St. Paul’s letter to the Philippians in which he advises his correspondents to think on such things. This world, in all its beauty and tragedy, seems to demand nothing less.

Part 1: Give Chance a Chance

This record was not, as Kanye claimed, a gospel record, and was maddeningly uneven, but this song is some of the most gorgeous, twisted, refracted spiritual music I’ve heard in years.

Chance the Rapper: “All We Got”

Chance’s third mixtape, Coloring Book, is actually the gospel album Kanye West claimed The Life of Pablo would be, and this song is clearly a musical if not a thematic sequel to “Ultralight Beam.”

Perhaps the zenith of Chance’s joyful, optimistic rap-singing, this 2015 track is both a celebration of his grandmother and paean to a kind of sacramental sexuality, which is not as weird as it sounds.

Woods’s beautiful voice has graced records by Chance the Rapper and Macklemore this year (and she is the icing on the cake on “Sunday Candy,” easily the best single of 2015), and her solo album is a breezy summer record with some pretty hardcore, personal lyrics about race, politics, and identity.

In addition to Chance fever, I admit to having caught Hamilton fever.

Part 2: The Verge of a Nervous Breakdance

Donny McCaslin leads the band that backed David Bowie on Blackstar, which came out in January just two days before Bowie’s death. I heard this song from his 2015 album Fast Future on the New Yorker Radio Hour during my commute and it felt like corny fusion at first, but by the final hook I couldn’t wipe the smile off my face.

This band, and this track, are the platonic ideal of something. I’m not 100% sure what it is. Something in the neighborhood of polished, commercial, pop-oriented, bass-led, overproduced, music theory-student funk.

I went through a brief M.I.A. phase this year, probably while grading papers. There’s something about the breeziness and groove—with just enough rough edge—that helps one get through a rough time.

I cannot stop listening to these guys—amazing production, a loose and lazy sense of humor, and an uncompromising gaze at twenty-first century transnationalism. (Also I couldn’t resist the sequencing after the previous track on the playlist.)

Part 3: A Brief Attempt to Rock Out, Despite Everything

Technically a 2015 track, but I saw Metric this year and was struck by how skilled they are at making songs like this out of extremely simple elements—a pounding synth line, an endlessly repeated hook—and letting the mood—in this case, one of hope and optimism—build and build until you’re overtaken by it. This is also my kids’ favorite song of the year.

Weezer made another good album(!), and this song, from the deluxe edition of their fourth self-titled record, is as close as they’ve come to the holy grail, a.k.a. Pinkerton b-sides, in years(!!).

The first post-Chris Walla Death Cab track I’m aware of, and it’s about Donald Trump (sorry to have mentioned him), and thankfully, it’s good: not on-the-nose protest music, but a quiet, staid refutation.

Part 4: Whatever Is True

Radiohead fans waited twenty years for a studio version of this track, and it’s a better version of the song than we deserve, somehow. This might be my pick for song of the year.

I’ve heard Julien Baker compared favorably to Dashboard Confessional and Pedro the Lion, which feels right. This 2015 song (which I discovered when my sister gave me the album for my birthday this year) wears its emotional and spiritual heart on its sleeve in the best possible way.

Leonard Cohen: “You Want It Darker”

We are supposed to complain about the insult-to-injury it felt to lose so many great musicians in an already awful year—e.g., Bowie, Prince, and most recently, Cohen—but with Leonard Cohen, the fact that this record immediately preceded his passing felt somehow deeply right. This song is so clearly about preparing for the end, and making peace with God—to the extent that a perpetual grappler like Cohen can—that the announcement of his death simply seemed the proper end.

Samson is easily Canada’s greatest living songwriter, and his latest solo record is more modest than most of his previous work, but just as achingly human. This is a song about turning off the Internet in order to recover the quiet, the personal, and the true, which, Spotify notwithstanding, is a very good idea. Quaecumque vera.

Joel Heng Hartse is the author of a somewhat irreverent book about pop music and faith called Sects, Love, and Rock & Roll, and the putative author of a nascent book about the meaning of music criticism called Dancing about Architecture is a Reasonable Thing to Do. Visit his website at www.joelhenghartse.com. Listen to his 2016 playlist here.