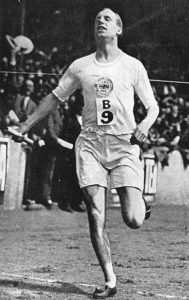 Maybe it was instinct that sent me back to relive the 1924 Olympic Games.

Yesterday you found me despairing, feeling a sudden collapse of my lifelong will to write. Slumped on the couch, I was watching, of all things, Chariots of Fire.

As a child, I loved this movie. But it wasn’t until college that I saw how it stands in stark contrast to so much evangelical entertainment, how it avoids a faith will make your dreams come true pep talk.

In fact, its most fervent evangelical figure, Eric Liddell’s sister, Jenny, is frustrated when her athletic brother postpones his missionary work in China in order to become an Olympic runner. Straightforward evangelism, Jenny believes, is the real work. If people are dying without hearing about Jesus, what is running but self-indulgence?

The tract-peddling, altar-calling culture in which I grew up would have loved Jenny.

And yet, Eric argues with her: “I believe God made me for a purpose, but he also made me fast. And when I run I feel His pleasure.”

His father supports him: “Eric, you can glorify God by peeling a potato if you peel it to perfection.”

And we still hear about Liddell’s faith today. Why? Because he ran. He ran like a holy fool.

In my early twenties, those words from Eric and his father blazed as justification for my desire to be a writer. It set me free from the pressure to turn stories into sermons. I understood that bearing witness had something to do with pursuing beauty and excellence rather than persuading others to embrace my worldview.

At my typewriter every evening, I wasn’t dreaming of bestsellers. I was seeking a loss of self-consciousness, an immersion in imagination. I lived for the moment when a story took on a life of its own. It felt like God’s pleasure.

Nearing thirty, I edited the first issue of a journal for artists, and my opening essay was titled “Peeling Potatoes to Perfection.” A thousand essays and several books later, here I am, minus my muse, exhausted, a little bitter, reveling in what exactly? Nostalgia?

Chariots of Fire has turned thirty, and it’s back on Britain’s big screens in anticipation of the upcoming London Olympics. Me, I’m a year past forty, and I’m expecting the film to seem like a sentimental antique.

Slow-motion race scenes, flashbacks, frequent echoes of key dialogue—it uses a lot of familiar tricks to develop suspense and announce its profundity. Nevertheless, the movie soars. Even Vangelis’s music, so overplayed since the film’s release, still works magic in the proper context. The film glows with strong performances, thoughtful conversations, and fleet-footed thrills.

This time, it’s Harold Abrahams who speaks to me.

Funny—I can’t remember anyone ever discussing the plot that runs parallel to Eric Liddell, Christian Olympian. If my community acknowledged Abrahams’ presence in the film, they saw him as the unbeliever whose arrogance made Liddell shine brighter.

But Harold, a Jew who runs with blinding speed to fight back against anti-Semitism, is given just as much screen time as Eric, if not more. And for good reason.

Abrahams is charismatic, driven, and endearingly arrogant. As he rages over his first loss, he shouts at his girlfriend, “I don’t run to take beatings! I run to win!” I used to find this off-putting. But after many years of seeing the corrosive nature of prejudice—in society and the church—I can appreciate Abrahams’ desire to teach the bigots a lesson.

What happens next is remarkable. To succeed, he willingly submits himself to someone else’s authority. Unable to win on his own, Abrahams takes on a coach.

Sam Mussabini—played brilliantly by Ian Holm who, that same year, played Frodo Baggins in a BBC radio play—sets out to teach Abrahams to stop looking for his competitors during the race. Concern about them disrupts his stride. (Comparison, they say, is the thief of joy.) Abrahams, finally accepting the humble posture of a student, listening closely, finds another two yards for his sprint.

And when Abrahams finds victory, Mussabini punches out the top of his hat in triumph—then whispers, “My son.”

Eric never seems concerned about competitors. Gracious, light-hearted, he’s making friends among foreign runners before the race. Races are an opportunity to enjoy what God has given him, extend grace to others, and astonish the world with a mystery.

This movie is cutting me open.

Our world reduces everything to competition—writing, cinema, singing, cooking. Even the news is full of shouting matches. These contests cheapen the arts they employ. They divide us into teams. They pollute our understanding of success. They blind us to the beauty of the people in front of us, and the mysteries at work within them.

We want idols, not inspiration. It feels good, this game of prediction and exaltation, pronouncing the best of everything.

And yet, when I watch Abrahams and Liddell run those last races, I’m awed by the strength in their strides.

I want to run like that—not to win medals, not to live up to the expectations of others, not to meet deadlines or dazzle audiences, but to discover what is possible.

I’ve become distracted by other writers as I try to keep up with them. The fear of falling behind, of being forgotten, is poisonous. It prevents the unselfconscious joys that draw us to run, write, and play in the first place.

I need a break from this culture of self-awareness, these unhealthy expectations and ideals. I need to leave the clamor of the arena so I can hear the call, the voice that will find me another two yards.

I’m sentimental, but I like the image of God punching out the top of his hat.

This post originally appeared on Good Letters on May 18, 2012.

Jeffrey Overstreet is an award-winning film critic, the author of a moviegoing memoir (Through a Screen Darkly), a novelist (Auralia's Colors, Raven's Ladder), and he serves as the senior film critic for Christianity Today. He teaches writing classes and fiction workshops at Seattle Pacific University, and film studies courses for Northwest University and Houston Baptist University. Visit him at LookingCloser.org.

The above image is in the Public Domain, via Wikimedia Commons.