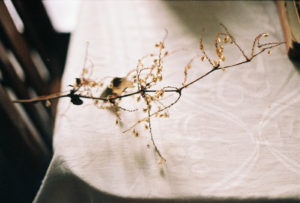 What is poetry, anyway? I found myself musing about this as I sat with John Slater’s stimulating new collection, Lean.

First I recalled what I’d once heard poet Li-Young Lee say at a reading:

Slater’s poems are as full of silences as of words. First, the poems themselves are—as the book’s title suggests—lean. With one exception, each poem’s lines run from one to four words. So there’s an invited silence at the end of each brief line. Then another, longer reverberating silence: many of the poems present an image, followed by a space with a * in it, followed by another image stanza, then another spaced *… and so on.

Take the whole of the poem “Thaw”:

Best
perhaps you
don’t write.
Less
friction
on the blister

Each spring
the pond
melts first
at the inflow.

Of the three sections, the first and third are clearly connected by their images of thawing. But what about that middle section? We pause and ponder. There’s play in this short section: the near-rhyme of “best” and “less,” each alone on its line; the address to an unidentified “you”; the fun that a blister is hardly a reason not to write.

Here is a poetry of images and pauses, of connections left hanging, reverberating in the pause. This forces the reader to be active in engaging the poem: What’s going on in this pause, this blank space? the reader asks.

Another definition of poetry that I like also comes to mind as I read Lean: poetry is “the simultaneous compression of language and expansion of meaning.” So wrote playwright Tom Stoppard, referring to Shakespeare. Throughout the poems of Lean, this is exactly what’s going on. Language is compressed: take those shortened lines, into which an image is compressed, as in this verse from the poem “Grounded”:

Crouched
in shadow on
granite
slab behind
the waterfall

A rich image is compressed into these nine words, an image that simultaneously expands into questions: Who or what is crouched? Why is “granite” highlighted by having its own line?

The poem goes on to answer the first question, while expanding this initial core image:

spray dusting
your face
tiny perfect
drop at
the tip
of one eyelash.

The poet and his companion are crouched… huddled… yet not quite touching. It’s a poignant image of the mystery of an intimacy that can only go as far as “almost.”

And speaking of the mystery that an image can carry, as so many images in Lean do, I’m reminded of what poet Sofie M. Starnes wrote in “Writing a Poem” (Christianity and the Arts, Winter 2000):

The poet lives in the contemplation of the individual moment. Such a contemplation requires…[that] the poet must become incarnate in one experience, distinct from all others. Through the isolation of one moment, the poet apprehends its heart and its edges, its thudding core and the fading wake of its sound. Only thus can the poet transfigure the experience, transient as it is, into a living thing—into a poem that tremors out of a page into the heart of the reader.

This describes the poet of Lean to a T. How perfect, then, that John Slater lives as a monk in the contemplative Trappist order. No two vocations—poet and contemplative monk—could complement each other so well.

Only a few of the poems in Lean deal specifically with life in the monastery. But here is one that enacts the “incarnation of one experience” that Sofie Starnes speaks of. The poem, on burying a fellow monk, is called “Apparatus”:

At last
your name could be
struck from the list
and the pass-code
forgotten.

This poem itself “lets the work show.” Its own work, I mean. The lean lines are as taut as the rhododendron buds. Line-breaks lay bare even the interiors of words, where the break is sharp within a word itself (rhodo-dendron; a-bove).

“Apparatus” exemplifies what poet and spiritual writer Murray Bodo writes in Poetry as Prayer: Denise Levertov: “The experience of the poem is not necessarily the experience that triggered the poem, but a new experience in itself, which is the poem.”

The experience that triggered “Apparatus” was burying the monk in winter. But as readers we don’t even know this until the next-to-last line—because the experience of the poem has its own drama. It’s a slow-paced walk, two or three words at a time, through the imagery of the snow-covered glitter of a garden; the finality of “your” freedom to “forget” a pass-code “at last”; then our holding our breaths at the “a-” of “a-bove.” I love how Slater forces us to hold our breaths just before we learn, in the next line, that a “grave” is what we’re exhaling into.

I’ve said that the poems of Lean are “lean” in their visual make-up: the thin vertical line that they draw on the page. But the collection plays with its title in other ways as well. The poems lure us so that we’re leaning into their enticing imagery. They lean toward their meaning, sometimes almost touching it but not quite.

And in another sense, the poems are the very opposite of lean: they’re abundantly rich in language that, as Li-Young Lee put it, “inflects the silences”—“like after church bells ring.”

Above image by Barbara W., edited and used with permission under a Creative Commons License.