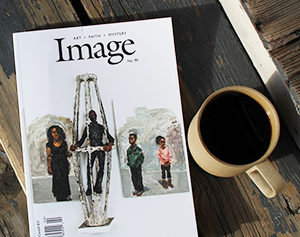 The writers and artists in our pages are interesting folks with interesting reading lives. So we asked the contributors in Image’s current issue: what have you read, seen, or listened to lately that you would recommend to our readers? They did not disappoint. (Read yesterday’s picks here.)

Want more Contributor Picks? Find more in our free review and curation service, ImageUpdate. Every week in your email inbox, you’ll receive thoughtful write-ups and personal recommendations from the Image staff, links to faith-infused art and writing from around the web, plus news about job openings, contests, conferences, and exclusive Image-insider deals and discounts. Did we mention it’s free? Subscribe here.

At the urging of my good friend Asher Gelzer-Govatos, I recently started getting into the midcentury British Catholic writer Muriel Spark. (Apparently, Asher is known for this sort of urging.) So far I’ve read The Prime of Miss Jean Brodie (1961), probably Spark’s best-known work, and The Girls of Slender Means (1963)—you can find them together with two other short novels in a lovely Modern Library hardcover. Both books were immensely enjoyable, not least because of Spark’s guilty-snort-inducing, acid humor. But it was after finishing The Girls of Slender Means that I slammed the book to the table and stood gawking and tingling until family members started asking me what was wrong. I can’t remember the last time I was surprised by the plot of a literary novel, but Spark shocked me. And the book contains one of the most memorable visions of evil I’ve ever encountered.

—Jonathan McGregor, author of “The Thorn and the Heart: Anxiety, Irony, and Faith”

Yaa Gyasi’s debut novel Homegoing tells the story of a family fractured by slavery, beginning with two half-sisters unknown to each other. Effia is married off to an English slave trader and lives in a castle just above nightmarish cells crowded with slaves—including her sister, Esi, who has been captured in a village raid and sold into slavery. The book moves chronologically and generationally, the chapters alternating between descendants of either Effia or Esi. Through this wide range of characters, the reader experiences the effects of civil war and the slave trade on West Africans, as well as the arc of American black history, arriving at characters moving through our present-day world, haunted and entranced by the past. In its entirety, Homegoing is at once sweeping and particular, with characters who are both victims of—and complicit in—the evils of dehumanization and slavery. This book is for readers interested in personal stories that convey and complicate whole histories.

I suspect I often read biographies of great poets in hopes of discovering some trade secret that will catapult my own work into the sublime (or perhaps in hopes of finding out how exactly one does get work into Poetry Magazine). While reading Robert Crawford’s Young Eliot, however, I forgot all about my own petty ambition and instead became absorbed in the story of one of the twentieth century’s greatest talents and finest minds. Crawford, himself a poet, is very insightful on the ways in which formative experiences in youth are reshaped into the material of the mature poet. The biographer has a knack for drawing close to his subject—he calls him “Tom”—but also for even-handed treatment of his flaws. It is no small accomplishment to make the author of The Wasteland and the writer who insisted above all on the “impersonality” of the poet so humanely real. Crawford has changed the way I read Eliot. I might also note that Eliot may be the book’s focus, but it is also remarkable for its supporting cast (Spoiler alert: Bertrand Russell could be a real S.O.B.).

Two Worlds Exist, by Yehoshua November, gives the reader a glimpse into the Chassidic world, but its poems address more than that. November is concerned with the invisible realm from which “That which appears tragic / slides down, unmitigated, / …a higher, unlimited good / this world cannot hold.” The stillbirth of his twin brothers, who shared one heart; the deafness of his young daughter; the accidental death of a young cousin in the family—these and other tragedies share the pages with a radiant faith which owns suffering by daring to illuminate it. November looks into the lives of others with compassion, too—including the woman too scantily clothed to visit her beloved in prison, and the student who stands up in the middle of an exam to announce “I’m gonna fail the class / a second time.” I tried reading these on the subway, but I had to stop. Too many strangers caught me crying.

—Susan L. Miller, author of “Manual for the Would-Be Saint” and “The Wolf of Gubbio.” These poems are collected in her new book, Communion of Saints: Poems.

Joseph McElroy is one of our finest living novelists (and maker of sentences), and Cannonball is a great reminder that he is both a highly acute and imaginative political observer. Set during the initial invasion of Iraq in 2003-2004, Cannonball follows a young Army photographer from Southern California to the subterranean recesses of one of Saddam Hussein’s palaces, and then back to an America recommitting to fulfilling its Manifest Destiny. The title refers to ordinance, of course, but also to a dive, images of which refract and proliferate through the novel like ripples in disturbed water. Cannonball does not neglect the prominent role religious ideology plays in early 21st century politics either. In McElroy’s version of the Iraq War, a previously unknown Gospel account, “a weapon of mass instruction” which would seem to ordain or even bless free-market capitalism, may be a hoax, a paranoid MacGuffin, a satirical gesture, or the thing that most clears passage through the novel’s verbal and psychological density. It is commonplace to the point of cliché to discuss novels as reflections of contemporary mores and social phenomena. McElroy, as always, understands perhaps more deeply than many other novelists, that such reflection does not equate with mimesis, but instead subtly displaces our reality so that we might perceive new truths in those relationships that link what we know we know and what we don’t know that we don’t know.

Become an ImageUpdate subscriber for free!